A Minnesota Minute and Carl Gawboy 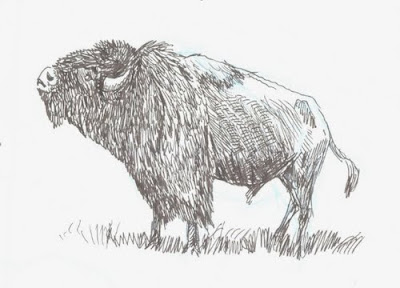 The Blandin Foundation, an organization dedicated to supporting rural Minnesota, created a series of one-minute television spots last year to commemorate the state’s 150th birthday and to celebrate its natural history. These pieces were produced in conjunction with The Bell Museum of Natural History and ran on local television stations during the prime-time viewing hours. The Minnesota Minute series was recently recognized with a regional Emmy Award.

These two organizations sponsor this site for the series, from which all 13 Minutes can be viewed and enjoyed. Below, Minnesota Minute features Carl Gawboy, a painter and a member of the Bois Fort Band of the Minnesota Ojibwe.
The excellent Minnesota Artists site offers both a slideshow and an interview with Mr. Gawboy. Here’s interviewer Suzanne Szucs introducing the artist:

And then there’s Carl Gawboy. Son of a Finnish mother and Ojibwe father (his parents fell in love over books), Gawboy grew up the youngest of 8 children in Ely where his mother inherited a farm. Trilingual in his youth (English, Finnish, Ojibwe) Gawboy began to draw before he could walk and knew he wanted to be a professional artist when he was four. His upbringing was “rural and woodsy” although he went to a “modern” school where he studied “interesting” things. An epiphany came when harvesting rice – “it was as interesting as it gets and my most Indian of experiences.” He decided his work needed to use his own experiences to tell the stories of his heritage. His images would emphasize the everyday experiences of Indians, not dwell upon romantic notions of an idealized people.

“Everything that I paint I actually did or saw… sometimes what I’ll do is move it back in time. It’s something that I have a part in or would try to do it so that I would know what it was like. These things [like getting together a group of students to make a birch bark canoe] gave me insights that I don’t think other people got. My work shows the culture and landscape of the region.”

Minnesota Public Radio also offers in its Voices of Minnesota series a visit with Carl Gawboy and Helen Blue-Redner, the former chairwoman of the Upper Sioux Community.
Tweet