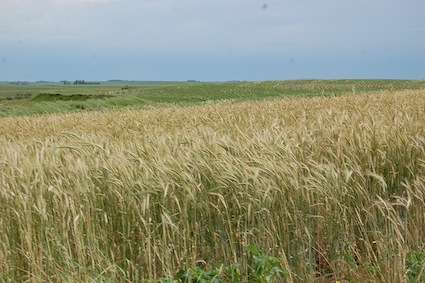 Templeton’s home-grown rye crop; Brewvana
[Editor’s Note: As I am facing numerous writing deadlines over the second half of February, this seems like a good time to give a retrospective glance to the first two years of Art of the Rural. Over these weeks I will feature a few new articles, but also many favorites from the archives. Thanks again to everyone who has read and contributed; what began as a labor of love has become a project far larger, and far more rewarding, than I ever could have anticipated – and I deeply appreciate the readership and participation of such a diverse audience. In March we will offer new articles and series, and share some new projects related to our mission.

[A Rye Whiskey Rural Arts Metaphor was originally published on February 9, 2011. A review of Kristian Day’s excellent documentary Capone’s Whiskey: The Story of Templeton Rye is forthcoming. The trailer for this film is included at the conclusion of this piece.]

**********
We occasionally like to dwell on issues of food culture and the culinary arts that have a particular rural connection (see the search function on the sidebar for Ian Halbert’s excellent series of articles), and today we’ve found a controversy that has developed across the state of Iowa that may be of interest to our readers.

The story involves Templeton Rye, a small-batch rye whiskey distilled in Templeton, Iowa. With the exception of liquor connoisseurs, most folks outside of Iowa–even most folks in the midwest–probably have never heard of Templeton, despite the fact that it is one of the most sought-after whiskeys in the United States. It’s also a whiskey with a compelling local and historical legacy. Here’s a brief introduction from the distillery’s site:

When Prohibition outlawed the manufacture and sale of alcoholic beverages in 1920, many enterprising residents of a small town in Iowa chose to become outlaws – producing a high caliber and much sought-after whiskey known as Templeton Rye.
Based on its extremely smooth finish, the American rye whiskey earned the nickname of “The Good Stuff” and quickly brought a certain degree of fame to the doorsteps of Templeton (pop. 350). As the premium brand of the era, Templeton Rye fetched an impressive $5.50 per gallon – or approximately $70 by today’s standards.
Over the course of its storied history, Templeton Rye became Al Capone’s whiskey of choice, quickly finding its way to the center of his bootlegging empire. Hundreds of kegs per month were supplied to Capone’s gang who in turn filled the demand of speakeasies throughout Chicago, New York and as far west as San Francisco.

Capone was eventually convicted on charges of tax evasion and sent to prison. Later legends suggest that a few bottles even found their way inside the walls of Alcatraz to the cell of prisoner AZ-85.

Although most American whiskeys ceased production after prohibition ended, Templeton Rye continued to be produced illegally in small quantities for loyal patrons. More than eighty-five years later, the infamous small batch rye whiskey finally returned – made available legally for the first time ever in 2006.

While the Capone connection may be enough to tempt a taste, the product’s history is far from a gimmick; this is one of the finest, and most unique, rye whiskeys that money can buy. Beyond the connection to Prohibition and Alacatraz, this is no doubt also related to the local elements of this product’s creation, to the care that the distillers–and the town itself–has put into each bottle. As their blog indicates, this distillery is intricately linked to its home region.

The Templeton controversy, however, has emerged at the convergence of all the wonderful attributes contained in the previous paragraph. Iowans want to purchase a quality drink with an Iowa connection,  stores in the state wish to stock this local gem, and–to confound this seemingly simple example of supply and demand–a huge number of urban, coastal connoisseurs are desperate to also enjoy a sip. Extraordinarily limited quantities of Templeton Rye can be found in upscale liquor stores in New York City, San Francisco and Chicago, often at considerably higher prices. Even within Iowa, it is very hard to find the product; often local stores will only receive 2-4 bottles a month. People turn to Facebook and Twitter (#TRspottings) to report when and where they have found “the good stuff.”

Ironically, then, a product which began as a contraband item has, through different circumstances, become again a subject of hush-hush conjecture. This has led, within the state of Iowa and no doubt through internet chatter, to the perception that the scarcity of Templeton Rye was linked to a single likely cause: Templeton was shipping a larger proportion of its product to distant cities. As the video below and the site’s allotment data indicate, this was only a perception. The vast majority of Templeton Rye stays within the Iowa border.

Herein lies a multifaceted metaphor. We see in this story those ever-present tensions between the local and the cosmopolitan, between the rural and the urban; we also see here the point at which a fantastically successful rural, regional business reaches a challenge that has less to do with profit-margins than with the community on which the entire enterprise is rooted. As a culinary art form, this is a kind of instructive tale for artists working within other mediums.

Also, looking more broadly at the well-earned success story in Templeton, we have an aspirational model for the rural arts. It’s a sort of material and aesthetic challenge for contemporary rural artists in all mediums, how to balance the desires of rural and urban audiences–and how to reach one’s local audience in such a way that they take the kind of ownership over their region’s work that Templeton’s Iowa base has exerted. While this controversy has been a challenge to the distillery, it’s an envious one for most rural artists. Imagine if the words “Templeton Rye” and “Batch 4” were interchanged in the video below with any number of other words: “our recent series of paintings”, “our recent book of poems”, “our current recording:”