Almanac For Moderns: The Autumn Dance 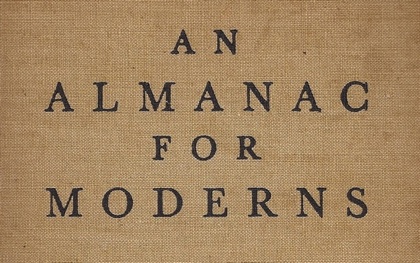 More information on our Almanac For Moderns project and the work of Donald Culross Peattie can be found here.
September Seventeenth

Now the autumn dance of the midges has begun, and I distinguish by the motion of their little eddies and spiral nebulae the different sorts–the tiny fellows that spin in some invisible maelstrom, the larger dark ones that tremble up and down in one vertical plane as if against a sheet of glass, and the clover midges drifting thick as storms of diatoms in the plankton of the sea. But though I swing my hat at them, they are too swift for me. It is the bats, in their goblin flight, seemingly so drunken, in reality so accurate, who catch the midges in the twilight when my eyes just begin to fail of seeing anything but the great outlines of the trees, the humped shadows of shrubbery.

Zoologists will classify the bats upon the basis of their incredibly convoluted ears, their sometimes preposterous noses, and their always exaggerated toes that appear like the ribs of their wings. No marksman, I seldom get a good look at a bat, save when I have picked up a wounded creature from the ground, jittering angrily and glaring at me from its uncannily knowledgeable black eyes.
I could never see why any one should fear or dislike any bat of the temperate zone. How often I have lain wakeful, in a great old house by the sea, under the ghostly cascade of the mosquito curtain, and delighted in the companionship of the little bats who swept in through the open window, mysterious, soundless, flirting with their own reflections in the dusky pool of the great mirror.
Tweet