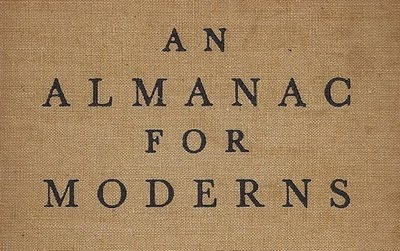 If progress is an increasing power to master and mold environment, then there is a strong current of progress in evolution. A one-celled flagellate certainly has but the dullest awareness of its environment as it bumps aimlessly about, but the redwinged blackbird hanging in its nest on the cattails and the muskrat digging crafty passages into and out of his home–these highly sentient, motile, instinctive and often intelligent creatures are a world and many ages beyond the blind and stupid flagellate. And last, in his majesty comes man, who if he does not like the marsh, will dig ditches and drain it off. In a year he will be turning a furrow there, sowing his domesticated crop, the obedient grain; he will drive out every animal and plant that does not bow down to him.

Man–man has the world in the hollow of his hand. He is a standing refutation of an old superstition like predestination–or a new one like determinism. His chances seem all but boundless, and boundless might be his optimism if he had not already thrown away so many of his opportunities. That very marsh was the home of waterfowl as valuable as they were beautiful. Now they must die, because in this world all breeding grounds are already crammed full. When he slays the birds, he lets loose their prey, and his worst enemy, the insects. He wastes his forests faster than he replaces them, and slaughters the mink and the beaver and the seal. He devours his limited coal supply ever faster; he fouls the rivers, invents poison gases and turns his destruction even on his own kind. And in the end he may present the spectacle of some Brobdingnagian spoiled baby, gulping down cake and howling for it too.
More information on our Almanac For Moderns project and the work of Donald Culross Peattie can be found here.
Tweet