An Appalachian And Agrarian Response to the Tragedy in the Gulf 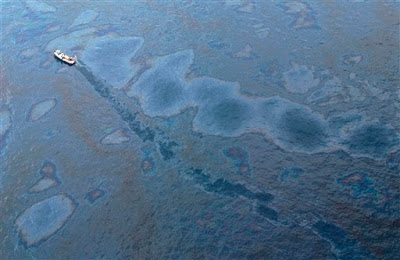 photograph by The Associated Press
The people of the Appalachian Mountains and Louisiana bayous have a lot more in common than fiddle tunes and distinctive accents. More than most, they are called on to sacrifice to satisfy this nation’s appetite for fossil fuels. And more than most, they are economically dependent on energy production.
Last week The Rural Blog posted a link to an editorial (quoted above) from the Lexington-Herald Leader that articulated what many folks, especially those in the Appalachian region, may have been thinking since the early days of the explosion in the Gulf Mexico. In the words of the editorial staff, this latest tragedy has “a familiar ring” to it. It follows the metric of all extraction economies in that it is tremendously lucrative and yet vastly destructive on all levels: the environmental, spiritual, and social. And especially in an “economic downturn” its oversized fiscal footprint disarms innovative and sustainable ideas in the region. Throw in lax regulatory oversight and a lack of political will in the statehouses and Congress, and what we see in the Gulf is Mountaintop Removal’s first cousin.

Certainly, the anger and resignation that our nation is working through this week–as officials warn that the oil may leak into the ocean for many more months–is of a kind similar to what many of us who may be from the Appalachian region are well acquainted with: that complicated and tortured understanding of how we all are linked, all implicated, to an industrial model that is destroying the structure of our communities all the while it puts on a show of setting up a few beams to hold things in place.

This line of thinking has led me back to the work of Wendell Berry, and to the absolutely prescient short essay he wrote in the weeks after the September 11th attacks–Thoughts in the Presence of Fear. What Mr. Berry saw in that piece, and in the national conversation that followed 9/11, was an opportunity to engage in a kind of reappraisal of how, as a nation, we are carrying ourselves in our world, in our environment and in our local places. As an agrarian argument, it’s worth revisiting in light of the events in the Gulf. Here are the first three sections:

I. The time will soon come when we will not be able to remember the horrors of September 11 without remembering also the unquestioning technological and economic optimism that ended on that day.

II. This optimism rested on the proposition that we were living in a “new world order” and a “new economy” that would “grow” on and on, bringing a prosperity of which every new increment would be “unprecedented”.
III. The dominant politicians, corporate officers, and investors who believed this proposition did not acknowledge that the prosperity was limited to a tiny percent of the world’s people, and to an ever smaller number of people even in the United States; that it was founded upon the oppressive labor of poor people all over the world; and that its ecological costs increasingly threatened all life, including the lives of the supposedly prosperous.
Continue reading Thoughts in the Presence of Fear at Orion Magazine, and as always, make sure to visit Mr. Wendell Berry of Kentucky for more insight.
Tweet