Art From The Town And The Country 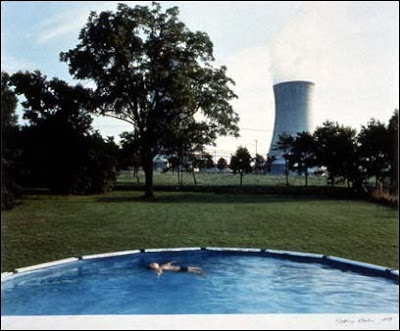 Over the last four months the Racine Art Museum of Wisconsin has shared works from their permanent collection to create a pair of exhibits, displaying crossroads between America’s urban and rural landscapes.  The first, Great Art from Tough Times: Wisconsin WPA Artworks in RAM’s Collection, honors the great tradition of watercolor painting by artists who also helped shape the Milwaukee Handicraft Project—a response to urbanization, unemployment and unskilled laborers during the Great Depression.  This exhibit examines a shift from rural do-it-yourselfness to urban mechanization between the years of 1936 – 1942.  Scenes such as Schomer Frank Lichtner’s “Freight Yards” and “Driving the Wagon” depict early labor as well as movement from the countryside to the crowded city. 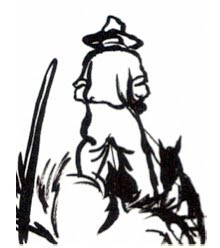 In these particular illustrations we see no signs of urban-dwelling trade or manufacturing, but only men and their means of work.  Mari Bleck’s linocuts “The Trapper” and “The New Cabin” depict a similar transition from the hermetic to the populated with her scenes of life in the forest. 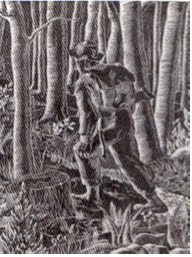 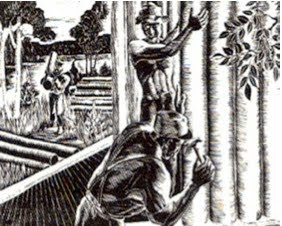 These works on paper share more than a common medium of gouache, ink, charcoal and watercolor.  The artists in the Wisconsin WPA exhibit all work in the style of Social Realism, which was common amongst WPA artists in order to convey the difficulty of the life and times in which they lived.  Through as sense of caricature and exaggerated features these illustrations heroicize the day-to-day life of the working class, such as in Frank Albert Bernhardt Utpatel’s wood engraving, “Rural Scene”, where a man with an elongated neck and arms sits next to his milk pale and looks down at a cat.  The figure is drawn to resemble the curvy trees that grow in the background amongst the stream and the road that frame this tired passenger.  We see this same style in his other wood engravings, such as “Potato Diggers.” 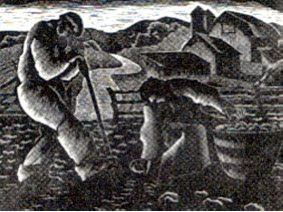 By delving into the biography of these painters we also see how the Wisconsin WPA provided an incredible source of relief for its state and the nation’s people by focusing workers (especially women) on developing craft and design at a time when institutions like libraries and schools were falling apart.  Elsa Ulbricht and Mary Kellogg Rice directed the Milwaukee Handicraft Project, which employed 5,000 workers, including trained designers and artists.  This program established eleven production units, including book binding, block printing, screen printing, weaving, rugs, appliqué, dolls, cloth toys, costumes, wood toys and furniture. 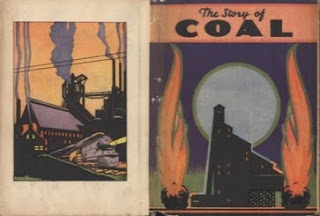 As a means of integrating women and minorities the Milwaukee Handicraft Project comprised a workforce of 25% African-Americans when Milwaukee’s Black population hovered around only 2%.  The program also offered day care for women and was one of the first printing presses to create books for the blind.  In November, 1936 Eleanor Roosevelt visited the Milwaukee Handicraft Project, which other national projects of the WPA were later modeled after. 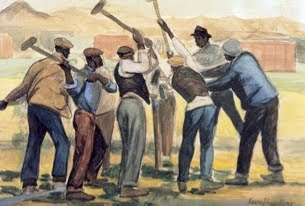 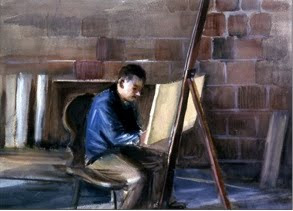 The second exhibit, Town and Country: Urban and Rural Scenes from RAM’s Collection, plays with the meaning of landscape painting, and reinterprets this genre through the eyes of photographers, sculptors, ceramicists, painters, carvers and ornament-makers, to reveal nature in all its variations.  While works from the RAM’s WPA collection fit prominently within this display, many of the Town and Country works veer away from Social Realism into realms such as Folk and Outsider Art.

Richard Notkin’s pottery work, for example, offers a functional art object like a teapot conveying a message about the endangerment of nature.   The tree that once grew from the paved neighborhood now offers no more shade for the hounds that once lay beneath its calming leaves.  Through Notkin’s medium his commentary becomes both social and aesthetic.  By associating the domestic and tranquil with wild dogs sleeping near a severed tree trunk, Notkin resignifies the work of a ceramicist with that of a sculptor. 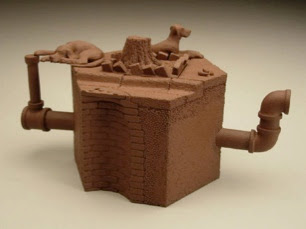 Artistic medium and definition of landscape come to define nature in other 3D works, such as with the collaborative team of Tom Rauschke and Kaaren Wiken, whose turned wood sculptures offer viewers a chance to explore miniature forests, gardens, ponds and volcanoes in their dioramas combining various gift woods. 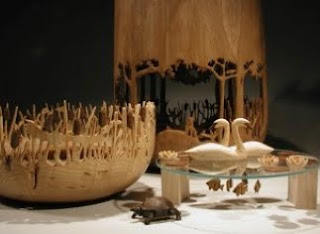 The artists in the Town and Country exhibit find as many new and unique ways to define themselves as part of the centuries-old tradition of landscape painting as there are mediums of expression.  Over one-hundred artists make up these cross sections of our country’s urbanand rural experiences.        The RAM’s collection remains on display until April 11th.  Many of the artists not mentioned here are worth checking out on the web. These include Wisconsin regional artists Brett Weston, Mary Giles, Adrian Saxe, Annette Corcoran, Carol Cohen and Warrington Colescott.
Tweet