Bessie Harvey And Her Tennessee Roots 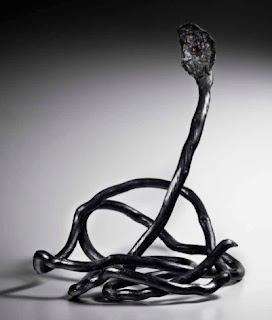 Untitled (Cobra).  23 1/2 x 18 x 19″ paint on wood with beads
[Editor’s Note: As I am facing numerous writing deadlines over the second half of February, this seems like a good time to give a retrospective glance to the first two years of Art of the Rural. Over these weeks I will feature a few new articles, but also many favorites from the archives. Thanks again to everyone who has read and contributed; what began as a labor of love has become a project far larger, and far more rewarding, than I ever could have anticipated – and I deeply appreciate the readership and participation of such a diverse audience. In March we will offer new articles and series, and share some new projects related to our mission.
Bessie Harvey And Her Tennessee Roots was originally published on July 12, 2010.]
The American Folk Art Museum in New York City is currently featuring an exhibit entitled Approaching Abstraction, a survey of work from their permanent collection that counters the popular assumption that “contemporary self-taught artists work solely in a representational style, eager to engage in storytelling and personal memory.” As the introductory materials to this show suggest, perhaps modern art audiences have been missing the ways in which these artists (from both rural and urban backgrounds) have been–while addressing the “social” content of their work–also thinking about the formal and aesthetic questions that we normally associate with the academic, insider, art world:

But while the narrative tradition often is a primary impulse, a significant number exhibit a tendency to be seduced by material, technique, color, form, line, and texture, creating artwork that omits or obscures representation.

The exhibition’s insistence here is fresh, and in some ways vindicating. While Ken Johnson’s review in The New York Times rightly suggests that we can’t successfully separate the stories of these artists from the pure “form, line and texture” of their work, it also seems to reflect back on the industry and academy outside these pieces: how often, when viewing much modern and post-modern visual art do we find an absence and, indeed, a refusal of social content? It’s refreshing then to watch AFAM curator Brooke Davis Anderson describe the exhibition below:
Ms. Davis spends a significant amount of time towards the end of this segment with the work of Bessie Harvey (1929-1994), an artist from eastern Tennessee who worked primarily with roots, though her art differs in profound and wonderful ways from the root club sculptures of Stan Neptune, who we discussed in March. The Bessie Harvey Homepage is the best place to begin discovering her work; it was written by The Knoxville Museum of Art in conjunction with local Austin-East High School, and it interweaves Ms. Harvey’s biography within the developing arc of her sculpture. It’s a story of uncanny perseverance in the face of cultural and familial obstacles, a triumph of the spirit and of a woman’s faith in her religion and her own abilities as an artist. As the Approaching Abstraction exhibit would suggest, her own relationship with her artistic medium–though in a different time and place–bears an intimacy that we might associate with great masters of abstraction such as Mark Rothko. Here’s an excerpt from the Homepage:

After resonding to its form, Harvey often sought its identity by speaking to it directly, asking, “Who are you?” For the sculpture Birthing, however, the artist’s initial indentification proved to be incorrect: “I went out into the yard and I found this piece and to me it looked like an old man leaning on a walking stick.” After bringing it into the house, Harvey was shocked that her vision had suddenly and dramatically changed to that of “an African girl; she’s a queen, and she’s giving birth to a baby, and the baby’s head’s already out.” As with Birthing, Harvey often was struck by the fact that her imagery sometimes seemed disconnected from her life experience, as if extracted from a previous lifetime on another continent: “I get the feeling that I been in the world before, and I think it was in the darkness of Africa,” and “There are some things that I know and some things that I do that I can’t understand how I know these things if I haven’t been here before.”