Changing A Food Desert, One Metro Stop At A Time 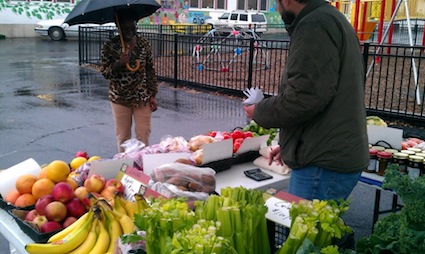 One of Farm to Family‘s Mobile Markets in Saint Louis
Despite its place amid some of the midwest’s most fertile soil, Saint Louis is plagued by large food deserts – both a testament to suburban migration begun in the 1960’s, but also to racially-motivated zoning and business models that survived in the city well past the Jim Crow era. [The BBC has recently discussed this history, in this excellent television report.]
The Sappington Farmers Market, a cooperative between Missouri small family farmers and rural entrepreneurs, has acted to help combat the scourge of urban food deserts by opening a series of Farm To Family mobile markets that will sell fresh produce and local goods at four bus/train stations. The Saint Louis Metro is allowing the markets to use the space free of charge, without asking for a share of the profits. STLToday offers further information, interviews, and photographs.
What is so encouraging about this effort is its panoramic vision of local food’s place in an urban locale; while Farm To Family also offers opportunities for weekly shares in a CSA program, and while they are connected with the successful Sappington Farmers Market, they are also branching out from the comfortable confines of the traditional local foods movement.
The farmers following this philosophy are an inspiration, and an example of thinking about “the whole horse,” as Wendell Berry would write, in an essay of the same name:

But experience seems increasingly to be driving us out of the categories of producer and consumer and into the categories of citizen, family member, and community member, in all of which we have an inescapable interest in making things last.

Folks can follow these individuals’ mission here; many thanks to City Farmer for leading us to this story.
Tweet