Coal, The Media, And The University 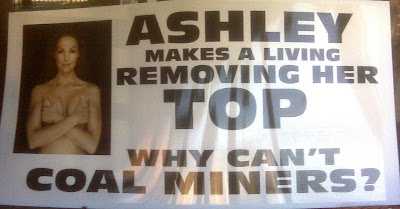 photograph via The Rural Blog
On Wednesday The Rural Blog shared the above image and it’s story: this week a coal industry golf event in Prestonburg, Kentucky was adorned with this billboard-size reproduction–paid for by “an anonymous donor.” It’s in response to Ms. Judd’s comments to The National Press Club last month, when she described Mountaintop Removal practices as “the rape of Appalachia.” The Rural Blog’s discussion of both this event and her preceding comments also features video links to her speech, as well as local media reports of Kentuckians’ reactions.
The site-specific nature of the billboard is in reference to a comment made by Judd (a self-proclaimed hillbilly) about the very golf course hosting the event, which was built upon ground reclaimed and reshaped after a mining operation. Ms. Judd told the assembled journalists “I’m not too keen on reinforcing stereotypes about my people, but I don’t know many hillbillies who golf.” As someone who has golfed a few times on a reclaimed golf course near my hometown, I’m less sure about that: I prefer those manicured sloped to the unreclaimed gaping strip pits which moat our family farm on three sides. Yet, this much is true of the reclamation ground in my home county: very little other than fairway greens and shallow pastures can be sustainably grown on them.
The more universal regional issue here, if you read through The Rural Blog’s analysis and peruse online comments, is to some extent an argument of outsiders vs. insiders that permeates so many issues in rural arts and culture, from the debate over extractive industries to the field recordings of John Cohen. Is Ms. Judd really a “hillbilly,” really a “Kentuckian?” Does her acting experience give her any purchase to criticize an industry that is providing jobs and services to local economies? Why should people who live far from the hills of Appalachia (and reap the benefits of Mountaintop Removal everyday) feel as if they can impose their politics and their philosophical standards upon these communities?
To argue against Mountaintop Removal and ignore the regional, cultural and economic dynamics of this debate is to propagate a such an insider – outsider binary that only ensures that the practice will continue. This is an instance where the rural communities devastated by this practice need their urban counterparts to not only help them, but, even more importantly, to understand them. Ms. Judd seems to speak to this in a recent blog post from OnEarth, a news site for the Natural Resources Defense Council:

The Appalachian Mountains are the oldest in North America; they may well be the oldest mountains in the entire world.  Peaks and ridges so ancient that geologists call them – rather poetically, I think – “deep time.”  Mountaintop removal only happens here; on no other mountain range in the United States would it be allowed to happen.  Indeed, it is utterly inconceivable that the Smokies would be blasted, the Rockies razed, the Sierra Nevadas flattened – that bombs the equivalent to Hiroshima would be detonated every single week for the past three decades.  The fact that the Appalachians are the Appalachians makes this environmental genocide possible and permissible.

The emphasis here is my own: as a country we would be well-served to examine our relationship and dependence on Appalachia. Though part of the most powerful democracy in human history, so much of mainstream America’s relationship to this place is of a nearly-colonial nature–we extract it’s resources while avoiding commensurate investments in the region, and we obscure Appalachia in either a media blackout or in ugly and abiding stereotypes. You can read this between the lines of the online commentators arguing that Coal Keeps The Lights On!: they resent the opinions of folks from the outside urban (and, for the sake of the analogy, imperial) centers.
The first step forward should be recognizing that the people from the Appalachian region have good reason for this resentment. The second step: think about how we can begin to invest in communities, how we can propagate sustainable local economies in place of this extractive industry. We can visit I Love Mountains, No More Moutnaintop Removal, the Coal Tattoo blog and Appalshop to learn more this about this facet of the discussion.
Wendell Berry has for many years been arguing that our investments in the environment only succeed when we are equal caretakers of our communities and our families. The sad companion piece to the ugly bit of billboard above is this news, also reported on The Rural Blog, The Daily Yonder and elsewhere, that Mr. Berry is removing his archives from The University of Kentucky. His decision comes a few months after UK announced that it would name its basketball dormitory Wildcat Coal Lodge, thanks to a $7 million dollar gift from the CEO of Alliance Coal. Mr. Berry’s decision here suggests that–if this region of rural America is looking for good ideas that can link the environmental, social and cultural spheres together–the University (and not just the one in Lexington) is abdicating its responsibility to the citizens it has a mission to educate. In this era of state budget shortfalls, and the evolving trend towards specialization and away from a “well-rounded education,” the argument in favor of naming a state-owned structure Wildcat Coal Lodge begins to resemble–to eerily resemble–the pragmatic arguments in favor of continuing the practice of Mountaintop Removal.
Below is a brief selection from an excellent conversation between Charlie Pearl and Mr. Berry published  last week in The State Journal. As always, we can count on the Mr. Wendell Berry of Kentucky site to offer the latest news and commentary on this controversy.

CHARLIE PEARL: Talk about what has happened regarding the decision to pull many of your personal papers from the University of Kentucky’s archives.

WENDELL BERRY: I’m sad about it. The ideal thing would have been for my papers to be there. William Marshall was the archivist when the university made that purchase of my papers before I began to deposit these on loan and he asked at that time if I would donate them. I said I have two children farming and these papers have a value, and if I come to feel that the university is really serving the interest of people like my children who hope to prosper on small farms, then I may consider donating them.

But until they’re secure and I’m assured of the university’s interest in people like them, I’m not going to do it. And I’m not naïve. I was not at all inclined to make an issue of the university’s manifest lack of concern about surface mining in Eastern Kentucky and it’s ecological implications, it’s implications for the forests, for the survival of the wild creatures and maybe preeminently for the rural people there that a land grant university is mandated to look after and help. This form of mining is literally hell for the people who live near those mine sites. I know some of them and I’ve heard the testimony of many others and I’ve seen with my own eyes what they’re going through.

I understood that it was probably too much to expect, even a land grant university, to take an interest in those things. But when the university accepted that ($7 million) gift and agreed to name their basketball dormitory after the coal industry, that meant they had passed over from indifference to a manifest alliance with the coal industry. I don’t think a university ought to make an alliance with any industry. I know that’s going on at other universities, and I think it’s always a breach of intellectual integrity and reputability and a breach of public obligation. That is a public university. It ought not to be allying itself with a private interest of any kind. When that happened, that made it impossible for me to tacitly accept that in terms of my own relationship with the university. So the question I had to answer was whether I wanted to be associated with the university on its terms, and the answer I had to give is that I don’t.