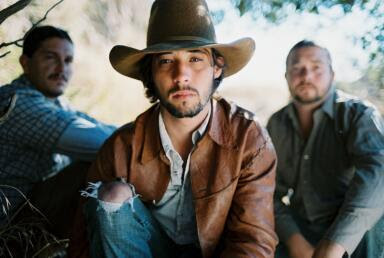 Me and my band were living out of our Suburban four years ago.
By the time Ryan Bingham spoke to reporters at the Academy Awards he was already a long way from the hard times of bullriding and roadhouse tours. Having won the Oscar for Best Original Song, for “The Weary Kind” from Crazy Heart, 2010 is shaping up to be a banner year for the young songwriter. He’s set to have his Are You Sure Hank Done It This Way moment later in the summer as he joins the Country Throwdown Tour, and a new record is reportedly on the way sometime after that.
It’s hard not to place this event alongside the passing of Mark Linkous in some ways; while Sparklehorse took the conventions of various forms of rural music and pushed them into the stratosphere, Ryan Bingham’s work shows a willingness to accept and respect these same conventions and to work within them to leave this own mark on that tradition. In both cases, the results are honest–not contrived.
Yet Bingham is also a product of the small towns of New Mexico and Texas, and he stands now as perhaps one of the most prominent new figures for a term we’re hoping to explore here at The Art of the Rural: the rural diaspora. Here’s Scott Gold, writing of Bingham in the Los Angeles Times:

He was born just across the New Mexico border, in the boom-and-bust oil town Hobbs. His grandfather was a cattle rancher and owned 72 square miles, each more stark than the last, between Hobbs and Carlsbad.

Bingham’s family lost the ranch amid a money dispute and would soon see more bust than boom. His father became a roughneck, an old-fashioned oil field worker who chased his work, first to Bakersfield, Calif., then to Texas — to Midland, Odessa, Laredo. They never stayed anywhere long; Bingham eventually stopped unpacking, then reduced his belongings to a cardboard box that he carried from town to town.

His parents, he said, “were not mean people. They just couldn’t get it together.” Trouble came in heaps: “Fights. Pills. Alcohol.” One day, he came home and slumped on the couch. The TV wasn’t working but something underneath the set caught his eye. It was a mirror topped with a pile of cocaine.

“I thought: ‘Well, no wonder the electricity got turned off again,’ ” he said.

Before his 17th birthday, he dropped out of school, where he’d grown tired of being the new kid in a small town, and left home for good.

Years of touring on the bullriding circuit and hawking his cds in the parking lot outside followed, and finally, after a few false starts and flirtations with cramming his music into a “Nashville” sound, Bingham met Joe Ely and was taken in by him and a number of other Texas songwriters. The results: his first two records on Lost Highway, Mescalito and Roadhouse Sun. Here’s two songs to enjoy:
Tweet