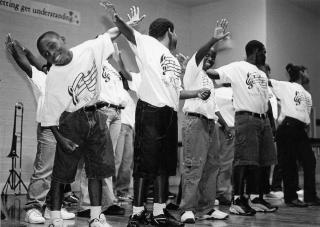 Bruce Weber in the New York Times reported today on the passing of Consuela Lee, the jazz pianist and music professor who returned to her hometown of Snow Hill, Alabama in 1970’s to revive the Snow Hill Institute, a ground-breaking school for rural African Americans created by her grandfather William J. Edwards. Here’s Alexander Cockburn describing the Institute’s inception in a 2001 article in the New York Press:

On the first day of 1889, a shy young black man called William James Edwards completed his three-day, 90-mile walk from Snow Hill to enlist in Booker T. Washington’s Tuskegee Normal and Industrial Institute. He walked with a limp, the souvenir of scrofula that had seen him only able to crawl as a boy, enduring without anesthetic Dr. Keyser’s periodic though ultimately successful assaults with a knife on the infected bone tissue on his heel and elbow.

Three years later the young man who’d never seen a kitchen knife and fork, and who’d slept all his life on the dirt floor of a one-room shack, graduated second in his class. He was confident and determined to return to Snow Hill and open an institute on the Booker T. Washington model. There were more than 400,000 black people in Alabama’s Black Belt in 1870, freed from slavery and mostly facing the new oppression of sharecropping, which seasoned nominal freedom with grinding toil and constant indebtedness, the lynch mob ready to chasten any impertinence with whip or noose.

Ahead of his time, Edwards reckoned one of the big problems of Southern agriculture was the destruction of the topsoil by greed and ignorance. “These waste places,” he wrote in his 1918 memoir Twenty-Five Years in the Black Belt, “can be reclaimed and the gutted hills made to blossom, only by giving the Negro a common education, combined with religious, moral and industrial training and the opportunity to at least own his home, if not the land he cultivates. The Negro must be taught to believe that the farmer can become prosperous and independent; that he can own his home and educate his children in the country. If he can, and he can be taught these things, in less than ten years, every available farm in the rural South will be occupied.”

Edwards started the Snow Hill Institute in the mid-1890s in a one-room cabin with one teacher, three students and 50 cents in capital. By 1918 the school boasted 24 buildings, between 300 and 400 students learning 14 trades and assets including 1940 acres of land valued at $125,000 and deeded to a board of trustees.

By the time Consuela Lee returned to Snow Hill in 1979, the Institute had been closed for six years.  Her grandfather’s vision of educating a community of independent farmers had met with the realities both of the region and the agriculture industry: as Cockburn cites, the 68 percent of Alabamans engaging in farm-related work in 1900 had significantly decreased, landing at 2 percent by the final year of the same century. Her home-region of Alabama stood as one of the most poverty-stricken areas in the country.
Ms. Lee’s new venture, the Springtree/Snowhill Institute, served as a performing arts school for local youth, with appearances by artists such as Max Roach, Odetta and Spike Lee (her nephew). Unfortunately, the Institute closed in 2003; Wikipedia reports that only eight of the original 24 buildings remain, though the University of Alabama’s School of Architecture is involved in rebuilding portions of the campus.
The Consuela Lee Foundation for Music Education offers a wealth of information on the Institute and Ms. Lee’s life, as well as links to her piano recordings and the work of William J. Edwards. They are currently completing a documentary, Honoring Ms. Lee. Here’s the preview:
Tweet