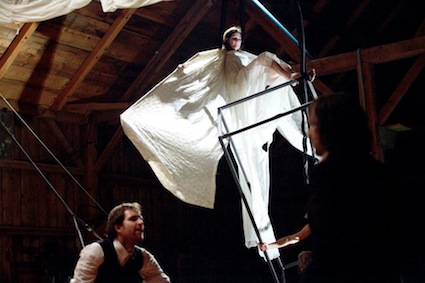 photograph from The Grand Parade rehearsals; Double Edge Theatre
The Arena Stage at the Mead Center for American Theater has just announced that Double Edge Theatre will offer the world premiere of The Grand Parade (of the Twentieth Century) February 6-10 in Washington, DC. Inspired by Marc Chagall’s paintings,  this piece offers a narrative of the twentieth century that The Arena Stage has described as “an emotionally stunning journey through the 20th century with the use of aerial flight, puppetry and music.”
As we’ve written previously, Double Edge is a one-of-a-kind theatre company that lives, trains, and farms in Ashfield, Massachusetts. Not only are they one of the most powerful examples of “laboratory theater” in this country, but they also focus on the idea of “living culture,” consistently asking how themselves how they can engage with local communities. This documentary excerpt begins to tell the story.
Here is more information from the Arena Stage’s press release:

The Grand Parade is conceived and directed by Double Edge Theatre Founder and Artistic Director Stacy Klein and is created with Carlos Uriona, Matthew Glassman, Hayley Brown, Jeremy Louise Eaton, Adam Bright and Milena Dabova. The show is realized with a collaborative team of artists from the United States, Argentina and Russia and features original compositions by Alexander Bakshi of Russia.

The Grand Parade creates a mythology of the American century and its Russian counterpart, from the story of Evelyn Nesbit in the 1900s to the fall of the Wall to the Supreme Court Gore v. Bush decision in 2000. This imaginative, kaleidoscopic mashup of the century echoes Chagall’s life, which spanned from 1887 to 1985, and summons the artist’s sensibilities and personal memories.

“Work on The Grand Parade has been a wild and revelatory experience, from learning that women are still facing the same century long struggle, and that lessons of war and economy have gone unheeded, to the amazement and sheer fun of peoples’ continued attempts to fly, to invent, and to laugh in spite of it all,” says Klein. “With Chagall as our muse, we have dared our way through the century’s chaos, trying to find our own thousand ways to fly.”

More coverage of The Grand Parade is forthcoming; until then, many gorgeous photographs from the rehearsals in Ashfield can be found on Double Edge’s Facebook page, along with recent news of their upcoming training intensive and their critically-acclaimed summer spectacles on the farm.
Related Articles:
The Odyssey of Double Edge Theatre
Tweet