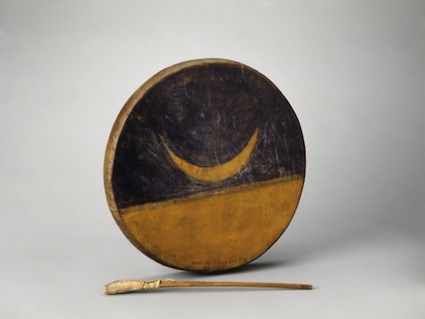 A Sioux frame drum, 1904; Museum of Modern Art
The Afrodrumming organization recently produced this video detailing two early recorded examples of Native American drumming. Many thanks to Kelle Jolly of Carpetbag Theatre for leading us to this video
Please find the video, alongside their introductory text, below. While the images are stirring in themselves, we would be very interested in learning, and sharing, more of the provenance and context of these clips.

Though the original footage is silent, music here is provided by The Hopi tribe of Arizona, Kerri Lake, Ephemeral Rift and Kevin MacLeod.

The following clip is the earliest known footage of ethnic drumming.

The original clip is silent.