Farmer of the Future and Harvest Public Media 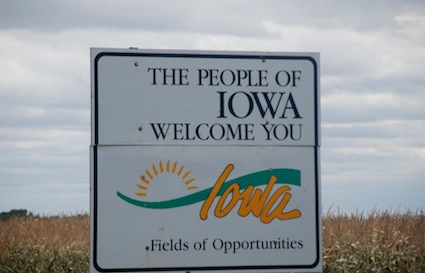 Photograph by Alison Rose; Forgotonia
This morning the excellent team of reporters and editors at Harvest Public Media began a series, entitled Farmer of the Future, that considers how “technological, cultural and political forces are bringing immense change to those people who commit to building their lives around the land.”

Kathleen Masterson offers the first dispatch, a report considering how the northwest region of Iowa, with its recent population growth and cultural diversity, presents both a model for the future and set of complex questions. Here is the transcript introduction to “Blending of Culture May be Blueprint for Growth:”

Sioux County, in northwest Iowa, is known for its Dutch pastries. The landscape is dotted with Lutheran and reform churches.  But today, Catholic churches and tortillerias are creeping into the landscape — signs of the new residents joining this vibrant community.

In Sioux County, as in a scattering of communities across the Midwest, Hispanic immigrants are working in meat processing plants, dairies, egg-laying facilities and hog barns. In fact, the majority of U.S. farm laborers today were born outside the U.S.

And while some parts of the rural Midwest are hollowing out, areas like Sioux County and its biggest city Sioux Center, are actually growing as immigrant populations move in to take jobs that otherwise employers cannot fill.

No surprise, Sioux Center looks very different than many other rural communities in Iowa. But although this area may well offer a glimpse of the farming community of the future, the melding of cultures is not always easy.

Masterson continues in her piece to talk with folks from all sides of the Sioux Center community. We find that, for many farmers in the region, the rhetoric of immigrants “stealing American jobs” masks the pressing need for agricultural workers. Furthermore, these new residents are contributing to an expanding local economy, in contrast with other rural regions of the state.
Harvest Public Media also provides, embedded within Masterson’s report, an interactive map illustrating the influx of hispanic immigrants within Iowa.
If we consider this news from Sioux Center alongside last week’s “Readings” piece on Thomas Hardy’s view from rural England — as workers fled from the fields for industrial centers, in some cases to complete against English agriculture as newly-American farmers — then we might see this news not as a political “hot-button” issue, but as part of a larger continuum, another element of a broader arc of international rural diaspora across the last two centuries.
Related Articles:
Readings: Rural Traditions Sunk Into Eternal Oblivion
The Farmville Files: Take Our Jobs
Mexican Migrant Workers, Vermont Dairy Farmers, and Local Artists
Tweet