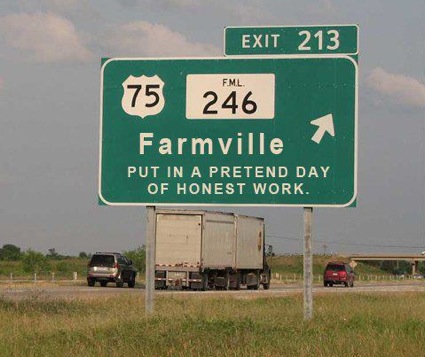 Longtime readers will remember a time on the site over a year ago when we posted a number of articles under the “Farmville Files” moniker. At the time, we thought of the series as a way to utilize the popularity of the Facebook application as a way to talk about what the online game had to say about pop culture’s representations of rural people and agricultural work.
As this morning’s article on The Farmer-Veteran Coalition suggests, there’s much more work to be done on this front — especially in linking agriculture to culture and to the arts. While there are many excellent sites related to sustainability and local food systems, we’d like to add our own perspective to these issues through a revitalized “Farmville Files” series of articles and contextual links.
To those ends, I’d like to share “Pastoral Romance” by Brent Cunningham; it’s a provocative essay originally published in the Food issue of Lapham’s Quarterly this summer. This piece focuses on two self-confessed urban foodies’ sojourn in Huntington, West Virginia and their efforts to eat (and promote) local, sustainable agriculture.
If this sounds like a scenario you’ve heard a thousand times before, give Mr. Cunningham’s essay a read. He covers the “‘bourgeois nostalgia’ [that] pervades the food-reform movement,” and a number of other issues that can make some elements of the organic food phenomenon a thorny subject. There may be, after all, some unsettling philosophical connections between the attraction of Farmville and those irresistible tables of produce at an urban farmers market.
Here’s the opening paragraphs of Brent Cunningham’s “Pastoral Romance:”

Betty Jo Patton spent her childhood on a 240-acre farm in Mason County, West Virginia, in the 1930s. Her family raised what it ate, from tomatoes to turkeys, pears to pigs. They picked, plucked, slaughtered, butchered, cured, canned, preserved, and rendered. They drew water from a well, cooked on a wood stove, and the bathroom was an outhouse.

Phoebe Patton Randolph, Betty Jo’s thirty-two-year-old granddaughter, has a dream of returning to the farm, which has been in the family since 1863 and is an hour’s drive from her home in the suburbs of Huntington, a city of nearly fifty thousand people along the Ohio River. Phoebe is an architect and a mother of one (soon to be two) boys, who is deeply involved in efforts to revitalize Huntington, a moribund Rust Belt community unsure of what can replace the defunct factories that drove its economy for a hundred years. She grew up with stories of life on the farm as she watched the empty farmhouse sag into disrepair.

Recently, over lunch in Betty Jo’s cozy house in a quiet Huntington neighborhood, I listened to them talk about the farm, and I eventually asked Betty Jo what she thought of her granddaughter’s notion of returning to the land. Betty Jo smiled, but was blunt: “Leave it. There’s nothing romantic about it.”