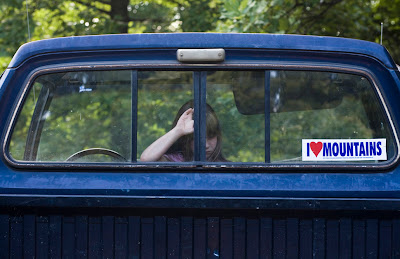 photograph from Brett Marshall
In the months since we began this website, we’ve tried, whenever possible, to share artists’ responses to Mountaintop Removal. In past posts we’ve shared the work of Appalshop, the visionary organization based out of Whitesburg, Kentucky that has been producing documentaries, music recordings, theater performances and community radio for over 40 years. The artists and thinkers at Appalshop have been covering the environmental and cultural costs of our country’s dependence on coal extraction (along with their larger project of preserving and celebrating Appalachian culture) for decades, and their work has blazed a trail for a new generation of artists.
The Coal War is a work-in-progress by a group of filmmakers from diverse backgrounds within the academy, the art world and the film industry. It’s director, producer and principal cinematographer is Chad A. Stevens, an acclaimed photographer who is currently a professor at the University of North Carolina. Here is the film’s synopsis, followed by a trailer for the project:

This is the story of a symbol: one mountain destined to be destroyed by the coal industry and the struggle to save Coal River Mountain by creating the first sustainable, green jobs project in the Central Appalachian coalfields: The Coal River Wind Farm.

Coal River Mountain is an ancient Appalachian cradle of rolling ridges and nestled hollows, providing refuge for delicate wildlife and a home to a unique mountain culture. But just beneath the surface lays something that calls into question the mountain’s very survival: $4.3 billion worth of coal. Massey Energy, the largest practitioner of mountaintop removal coal mining in West Virginia, holds permits to clear-cut 6,450 acres of hardwood forest, detonate thousands of tons of explosives and topple the mountain range into over nine miles of streams in the valleys below.

Since the 1960s, residents in the coal fields of West Virginia have fought to preserve their land, only to watch the coal industry continue to destroy mountains and uproot their ways of life. While the consequences of coal and mountaintop removal mining are severe – lethal flooding, water contamination, cancer pockets and the annihilation of the land on which families have lived for generations – the powerful coal companies have remained unstoppable. Recently, however, new hope has appeared in the form of a viable energy alternative to mountaintop removal: Wind Power.

This film documents a campaign that could serve as the foundation of one of great shifts in human history – the movement to break the addiction to a fossil fuel-based economy and shift to one rooted in renewable, green energy.

The Coal War | Trailer 2 from Chad A. Stevens | milesfrommaybe on Vimeo.

The short films to emerge from Mr. Steven’s footage of The Coal War have won numerous awards, and a critical mass is building around this film and the movement to save Coal River Mountain. Tom Zeller Jr. wrote an in-depth feature on the struggle last week in The New York Times, and the Discovery Channel’s Planet Green channel recently leant its support to the film project. In both cases, it’s encouraging to see how this issue–local to Appalachia–is being understood for its implications in an urban, and national, context. (The Coal War team has also reported recently on the EPA’s wobbly stance on MTR for The Daily Yonder; for daily coverage of these issues, refer to the Coal Tattoo blog.) Beyond the numerous trailers for the film, The Coal War site offers a number of resources for viewers to learn more about Mountaintop Removal and to get involved.

One such opportunity is approaching: Appalachia Rising, a “mass mobilization” that will gather in Washington, DC during the weekend of September 25th and then branch out across the nation’s coalfields for a national Day of Action on Monday September 27th. Below is an internet trailer; please follow the links for more information on how you can get involved: