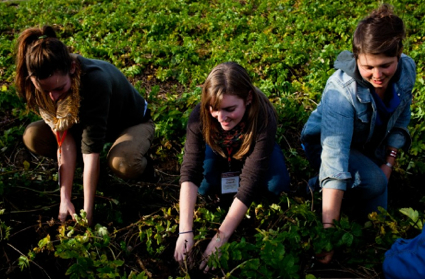 From the 2011 Young Farmers Conference; Maggie Starbard, NPR
Many thanks to the folks who have shared news of this report by Dan Charles broadcast on NPR’s All Things Considered yesterday: “Who Are The Farmers of ‘Generation Organic’:”

For decades, as young people have been leaving farms behind, the average age of the American farmer has been rising. The last time the government counted farmers, in 2002, the average farmer was 55-years-old.

But there’s a new surge of youthful vigor into American agriculture — at least in the corner of it devoted to organic, local food. Thousands of young people who’ve never farmed before are trying it out.

Mr. Charles’s piece proceeds to tell the story of The Young Farmers Conference, hosted by the Stone Barns Center for Food and Agriculture in Tarrytown, New York. Located 25 miles north of Manhattan, the Center is a fully-operational farm that works to train farmers and design public outreach programs that communicate the benefits of “healthy, seasonal and sustainable food.” In particular, the Center is charged with a mission to bring this message to children, that next generation of consumers and potential farmers.

The Center fosters some extraordinary rural – urban connections, and, as exemplified by their introduction to the Young Farmers Conference, they also focus in detail on that other aspect of farming – the fact that farming is a business. The Center is also raising a new generation of rural entrepreneurs.
All of these facets of the mission revolve around what Dan Barber, of the well-known Blue Hill restaurant and farm, shares in the video above: that “you need to be inspired by a place, and have that place become a part of that experience.”
This is echoed in the voices of those emerging farmers who participated in the 2010 conference:

Voices from the 2010 Young Farmers Conference from Stone Barns Center on Vimeo.

More than most media produced about “generation organic,” or whatever one wishes to call this movement, this video gives me great hope. As a child of the Farm Crisis, I lament the extent to which the sustainable agriculture movement is portrayed in a pastoral, romantic light — a kind of soft-filtering of Wendell Berry’s hard truths.
We are not having a serious discussion about the “sustainability” of this movement (culturally, economically) until we’ve brought the mass of new urban-born farmers into discussion with those farmers and communities rooted in their rural place, until we have “conventional” and “organic” farmers sitting down at a table together. Too often the urban/university-driven dynamic to this movement can seem to slight, or outright condemn, those farmers who have lived for decades on the land. That attitude is the least sustainable element of the movement.
Yet, when we hear this diverse group of young farmers explain their motivations, we can’t help but be heartened. As we look forward to 2012, I hope to bring more news of Stone Barns Center for Food and Agriculture and The Young Farmers Conference.
Tweet