From Bulgaria to North Carolina, Following The Song 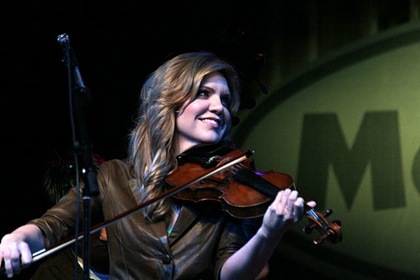 Editor’s Note: Today we welcome our intern Rachel Beth Rudi to The Art of The Rural. As she begins her work here, we offered her the chance to introduce herself to our readers.

I was born in small-town Vermont and raised in a farmhouse on a hill. My flatlander parents were art students of moderate means who moved east in the ‘80s, and had the privilege to choose what sort of lives they would lead. My mother was a full-time social worker, my father a stay-at-home husband.

In his twenties, my father developed an obsession for music. For two- or three-month periods he would devote hours upon hours to studying one genre or another and, by the time I was born, the large living room speakers boomed with sounds from around the world. I soaked in the spectrum as I crawled through the house: minimalist music, ‘90s pop radio, West African drumming, Qawwali, classical, country, Gregorian chant, jazz, show tunes, blues, each with their own phase, our world converting to theirs. We would sing along, or dance along, or stand in front of the stereo with arms crossed, brows furrowed, legs in a strong stance, letting the sound give us a good washing. After we’d drunk in something new, he’d take my arm and sit me down on the sofa, look at me intently, and ask,
“What did you think?”
When I was small, I’d likely reply with “It’s good,” or “It’s not very good.” A few years later, he pressed further.
“Why?”
“Why what?”
“Why wasn’t it good?”
“I didn’t like the singing.”
“Why?”
“I didn’t like her voice.”
“Why?” 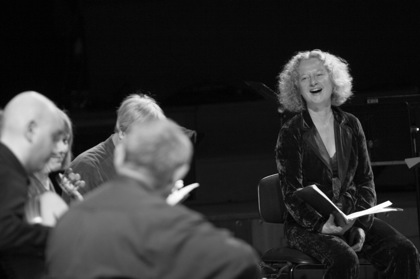 Anne Azéma, Artistic Director of The Boston Camerata
The conversations overflowed into lunchtime, and our over macaroni and cheese he taught me to justify my instincts on quality, consider the story of a song before making up my mind.In high school, I joined a vocal ensemble called Village Harmony, an organization whose participants study and perform community-made genres from Corsica, South Africa, Appalachia, Caucasus Georgia, Eastern Europe and the Deep South. For one or two weekends a month, thirty of us would come together in some New England church and rehearse, twelve hours a day, in a large circle. In the spring, we toured from Maine to Ohio, from North Carolina, to most states between, easily loving each other and learning how a community’s history is contained in its songs.Twenty-five of us traveled to Bulgaria in 2005, flying from Boston to Sophia and arriving at our rehearsal space in the Rhodope mountains on a tour bus. I had been listening to Bulgarian field recordings for three years by then, and had come to learn how to grasp the right timbre. I was told I was a good singer, but I found my own voice displaced and rootless, an ungrounded interpretation of intangible, digitized traditions.

Petrana Koutcheva
On the evening of our arrival, we gathered in the rehearsal room and arranged ourselves in a circle on the floor.  Petrana Koutcheva walked into the center. This woman, our instructor for those three weeks, is known across her country as one of the finest Bulgarian singers in the world, heavily invested in the preservation and perpetuation of her culture’s music. She stood quietly; we sat curiously. She sang.This was the instant I became a singer. She taught me every lesson I’ve ever needed within the course of those seconds; nothing before or since will ever matter so much. Watching her chest fill with kinetic music, her eyebrows and the corners of her lips reach for a peripheral ornament, watching her memories, experiences, hopes carve a landscape for her voice to travel. After that I have never forgotten, never will forget, how to sing.I moved south for college, leaving my northern singing family behind in the shifting toward early adulthood. But I strove to start fresh, and came to Warren Wilson College in western North Carolina. The new home felt more organic, less of a cultural hybrid, and although I missed singing in foreign languages I’ve grown close with North Carolina ballad singers and have gained a new musical family through singing from the Sacred Harp. I began traveling ten hours on most weekends to sing in Georgia and Alabama, and made weekend visits to Madison County, North Carolina, not only to sing with others, but to pray with them, eat, drink, recall, love and laugh. 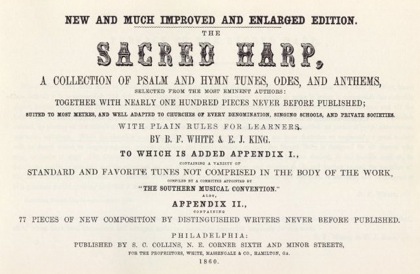 I am now a young person at a crossroads – one with no certain route, one that can always be found again or adjusted, one that implies many homes, families, pasts, futures. Vermont is where my song started, but these things have a way of meandering. Singing has given me some semblance of a philosophy but if life was my father, it’s got me sitting on the sofa right now, asking, “So, what’s the song taught you so far, and where will you take it now?” I’m trying to take in the songs and histories I’ve stumbled across, chew the melodies over until I’ve refined my own version.

I first came upon The Art of the Rural during one of those late-night strings of Google searches, the kind college students can spend hours on as they dream of Real Life After College. I scrolled through pieces addressing new approaches to rural issues, the bolstering of small communities, and respectful portraits of people still holding onto knowledge given to them by those before. While each piece was beautifully concise and attentive, equally complete was the overall collection of vivid, honest accounts of rural life. 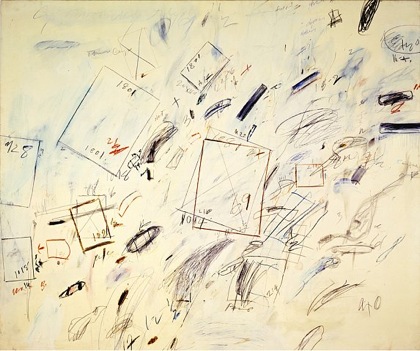 Untitled Sketch; Cy Twombly
My father has taken his time with fixing up our old house, and hasn’t painted for two decades. Instead, he does thumbnail sketches with any old ballpoint pen, miniature outbursts that play with light and shade, shape and angle. I’ll find them on napkins, in newspaper margins, on the backs of unopened bank statements. He calls them his sketches, saying that in an ideal world, they’re full-sized paintings. He likes to imagine, he says, what happens to the rhythm of an image when you alter the perimeter; certain contexts have smoother or slower rhythms than others. His thumbnail sketches are thoughts and themes translated into measurement, stretched or pushed into a new frame: studies in reconsideration.Study is from the Latin studium, meaning “application,” and, originally, “eagerness.” This is of studere, “to be diligent” and “to be pressing forward,” of Proto-Indo-European, *(s)teu-, “to push, stick, knock, beat.” The noun form for “application of the mind to the acquisition of knowledge” is from 1300.My father’s splashing of concept onto paper, and his pushing and pulling of parameters, is what passion is, what a life is for. As I sit on the sofa and try to take in my singing experiences, I know that while their meanings are ambiguous – whether they’re good, or bad, and why – I have to put them into whatever roughly coherent form I can. My installments with The Art of Rural will be my attempt to push these themes around, stick them into different contexts, knock and beat them until they’re good and worn in, proven that they’re the stuff I can put my trust in.
Tweet