From Last Chance To Venice: A M12 Mixtape 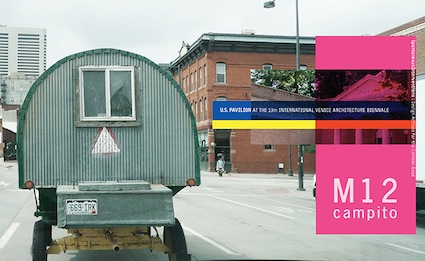 This week the M12 art collective has traveled from their usual base of operations on the Colorado High Plains to the European Lowlands, more specifically the 13th International Venice Architecture Biennale, the most prestigious event in this field. [full disclosure: AOTR Director Matthew Fluharty is on the M12 Board of Directors.]
In a confirmation of the values and aesthetic objectives of the M12, the collective’s Campito Project will stand in the US Pavillion as part of the show Spontaneous Interventions: Design Actions for the Common Good.
We will be featuring an interview with Richard Saxton and Kirsten Stoltz of the M12 when they return stateside but, until then, we offer this From Last Chance to Venice mixtape — a selection of songs near and dear to these artists. The Last Chance portion of the title refers to the small town (pop. 14) in Colorado that is collaborating with the M12 to create The Experimental Site for Rural Creativity, a permanent home for the M12’s work.
For folks who don’t use Spotify, we offer this mixtape via YouTube. As some of these songs could not be found on YouTube, other songs by these artists are presented instead:
A Good Flying Day – The Sadies
That’s When I Reach For My Revolver – Mission of Burma
Cherry Bomb – The Runaways
Cachaca – Calexico
Cannonball – Waco Brothers
Ether – Gang of Four
Aspirin – Green on Red
Rebel Girl – Bikini Kill
43 – Richmond Fontaine
Betty’s Overture – Lambchop
She’s a Wild One – Blue Moutnain
Oh Bondage Up Yours – X-Ray Spex
Man of Constant Anxiety – The Bottle RocketsRelated Articles:
M12: A New Vision For The High Plains
M12 Collective: Ornitarium
Richard Saxton’s Vernacular Landscapes
Tweet