Frybread: In Film, Art, Architecture, And Beyond 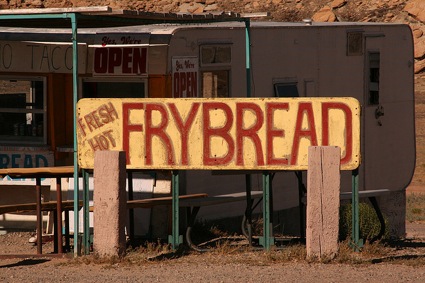 Revolutions Per Minute: Indigenous Music Culture is a relatively new site that’s offering a wealth of news on contemporary music and arts. One of the recurring features on RPM is #frybreadfriday; a multimedia series that explores the centrality of this delicacy across Native American culture. From playwrights to rappers, interpretive dance to comic book art, RPM has opened up a vibrant discussion on this relationship between food culture and the arts. The photograph above is included within RPM’s Frybread Stand gallery, a collection that demonstrates how this food is also influencing vernacular art and architecture.
One project that’s appeared across a few #frybreadfridays has been Holt Hamilton’s More Than Frybread, a hilarious mockumentary currently set to be released in early 2012. Here’s an introduction to the film:

The First Annual State of Arizona Frybread Championship, sponsored by the World Wide Frybread Association, will be holding the first ever state frybread competition. All twenty-two federally recognized Arizona tribes will be sending their best frybread maker to represent their nation and to compete for the coveted frybread title. The winner will receive $10,000 cash, the official WWFA frybread trophy and a spot to compete for the National Title, which could possibly then lead to a shot at the World Wide Frybread Championships later in the year.

The folks behind this film have made the World Wide Frybread Association a reality — follow the link for videos, maps and further information.

Again, there’s much more to explore on RPM – it has become one of our favorite sites, and we highly recommend a visit.