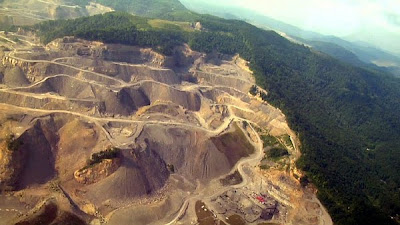 Deep Down: A Story From The Heart of Coal Country had its broadcast premiere last night on Kentuck Educational Television. It’s a film by Jen Gilomen, (Delta Rising) Sally Rubin (The Last Mountain) and produced by David Sutherland, the filmmaker behind two absolutely outstanding documentaries: The Farmer’s Wife and Country Boys. Here’s their eloquent description of the context behind the project, which premieres at a moment when the EPA is taking many long-overdue steps to halt the spread of Mountain Top Revoval:

Any exploration of power production in America will lead to Appalachia, a region that has supplied our nation with coal for over a century. As America’s energy consumption rises, the extraction and burning of coal to meet these demands has dramatically altered the Appalachian landscape, economy, and culture. The Tennessee Valley Authority, for example, is assessing the potential of mining an estimated 82 million tons of coal from the Royal Blue Wildlife Management Area. (By comparison, only 3 million tons were mined in the entire state in 2002.) In Appalachia, coal is the number one industry, with an enormous influence on local economies and people. At the same time, few Americans know about mountaintop removal mining (MTR), nor have any knowledge that their own demand for power is directly impacting the mountains, water, and sky. As we increase our energy usage, we also become more and more removed not only from the natural places that have provided this energy, but from the human beings whose lives we dramatically alter by consuming those resources. The crossroads we find ourselves facing as a nation is one that pervades our land and sky, and it can only be addressed by the cumulative efforts of millions of tiny personal changes. Therein lies the potential for a human story, like the stories we have found in Appalachia, to make a million tiny changes, to reconnect us as humans to the suffering we have caused as well as our own power to prevent it in the future.

Simultaneously, Appalachia as a region deserves our attention as a place of history, complexity, and change. A century of Appalachian scholars and journalists have attempted to eradicate the persisting stereotypes of the Appalachian “hillbilly.” In a society where making fun of a person’s way of speaking or ridiculing their poverty is normally considered unacceptable, mainstream television programs and films continue to portray stereotyped and homogenous images of Appalachia, if they portray them at all. As our advisor Dr. Chad Berry of Berea College so eloquently puts it, “there is not an Appalachian culture, there are Appalachian cultures.” Similarly, we pride ourselves as Americans in being a diverse society, but often neglect the rural poor in the study and depiction of that diversity. It is time for us to look back to this “forgotten” region, to allow its people to teach us and to teach each other about these cultures that the mainstream media has almost entirely overlooked.

By asking us to trace the power lines from our homes to people far removed from our daily lives, Deep Down inspires Americans to preserve Appalachia and our shared legacy.

Here’s a trailer for the film:
There are many more aspects to explore on the Deep Down site, including their People Power series of video vignettes–where folks engaged with this issue can tell their own story, in their own words. Here’s one example about life underneath the power plants, told by Elisa Young of Racine, Ohio:
And don’t forget the music:
For the more technologically-savvy, the producers also established a Virtual Mine on Second Life, where participants can explore a Mountaintop Removal site and learn more about the issue. Also, as always, visit Coal Tattoo for more on these issues and to hear more about the latest in the ongoing investigation in Montcoal.
Tweet