Honoring The Treaty: Aaron Huey and The Pine Ridge Reservation 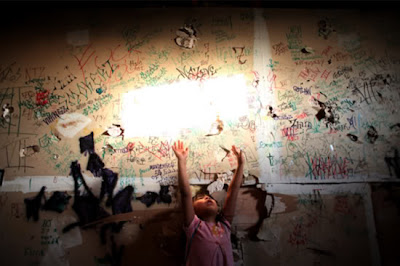 photograph by Aaron Huey
All my first assignments were about poverty and gangs, and all those first stories skimmed the surface. And now, six years later, now that I know the real story, I realize that mainstream American magazines won’t print it. The real story is the history: the history of broken treaties, prisoner-of-war camps and massacres. It’s too hard to look at, it’s too dark, it’s too layered and too painful to fit between shampoo ads and car commercials.  This project has reached the limits of print media.

Thanks to the High Country News and their Facebook page, I’ve had a chance to learn more about the work of Aaron Huey: both his photographs and his commitment to Native American communities. The High Country News linked to this recent piece by Miki Johnson of Popular Photography, which, in its opening paragraphs, expertly sets this complicated scene:

In April 2005, Aaron Huey drove into Manderson, South Dakota, the roughest town on the Pine Ridge Indian Reservation, and started knocking on doors. “Hey wasichu (white boy), what are you doing with that camera?” yelled a young Lakota man covered in tattoos.

“Just looking for stories,” Huey answered. “You got any to tell?” Huey, then 29, was a determined if somewhat green photojournalist, riding a wave of positive attention from his recent photo project on a solo walk across America. Pine Ridge was the first stop on a self-assigned survey of poverty in America. The survey stopped there, but a new story had just begun.

Pine Ridge, the site of the 1890 Wounded Knee Massacre, has been the poorest place in America for nearly 40 years, with 97 percent of its population living below the national poverty line in 2006. The infant mortality rate on the reservation is three times higher than the national average, the highest on the continent; life expectancy for men is 48 years old, roughly the same as in Afghanistan and Somalia.

Ms. Johnson tells the story of how this emerging artist (now an internationally-known photographer) comes to terms with his art and his relationship to his “subjects” (Native American or otherwise) through his repeated visits to the Pine Ridge Reservation. Skeptical of the kinds of art that have, from a comfortable distance, profited from the Native American reservation experience, this community often asked Mr. Huey the same pointed question: “Who gives you the right to tell our story?”
Though the breathtaking skill and emotional range of the photographs (see his gallery here) in part help to answer this question, Mr. Huey seems to suggest that by recognizing his own position within this complicated cultural issue he was able to find the right, and the right perspective, through which to share the narrative of life at Pine Ridge–past, present and future.
To those ends, Mr. Huey has embraced the potential of his art to engender positive change for this community. Here’s Ms. Johnson again:

In May 2010, Huey got up on stage at the University of Denver and unequivocally chose his side. In his 13-minute talk, which was posted to the TED lecture series online, Huey outlined 186 years of Lakota history, including dozens of broken treaties and the murder of unarmed women and children at Wounded Knee. After repeatedly holding back tears, he closed the talk by calling for the United States to honor its treaties and restore the Black Hills to the Lakota. 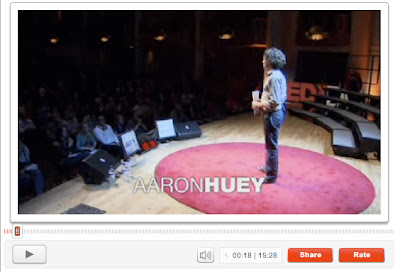 Mr. Huey’s talk sparked a lot of conversation; much like the photographs themselves, his audience was asked to look hard at Native American relations in this country and to consider how each American living outside of the reservations are complicit in the forces that have profited from the repeated treaty-breaking and land-grabs that began, by Mr. Huey’s narrative, in 1824.

There’s an interesting juxtaposition between his evolving role as an artist within this community and how he feels many Americans perceive Native Americans. Here are two excerpts:

You’ll see a lot of people in my photographs today, and I’ve become very close with them, and they’ve welcomed me like family. They’ve called me brother and uncle and invited me again and again over five years. But on Pine Ridge, I will always be what is called wasichu, and wasichu is a Lakota word that means non-Indian, but another version of this word means “the one who takes the best meat for himself.” And that’s what I want to focus on — the one who takes the best part of the meat. It means greedy. So take a look around this auditorium today. We are at a private school in the American West, sitting in red velvet chairs with money in our pockets. And if we look at our lives, we have indeed takenthe best part of the meat.
…..
The last chapter in any successful genocide is the one in which the oppressor can remove their hands and say, “My God, what are these people doing to themselves? They’re killing each other. They’re killing themselves while we watch them die.” This is how we came to own these United States. This is the legacy of manifest destiny. Prisoners are still born into prisoner of war camps long after the guards are gone. These are the bones left after the best meat has been has been taken. A long time ago, a series of events was set in motion by a people who look like me, by wasichu, eager to take the land and the water and the gold in the hills. Those events led to a domino effect that has yet to end.

Aaron Huey is responding this by leading the Pine Ridge Billboard Project, an effort to place “guerrila billboards” concerning the real lives of folks on the reservation alongside major urban American thoroughfares, so that the message will be “so loud that it cannot be ignored.”  Mr. Huey is using the Emphas.is website (a kind of Kickstarter program for photojournalists), and the response has been “so loud” that the project has been fully-funded by individual donations. Two of America’s most well-known street artists, Ernesto Yerena and Shepard Fairey,  have contributed work to help raise donations. He’s looking for people not only to make donations, but to join in helping to spread this message, and these images, in the coming months.
Aaron Huey has set up the Honor The Treaties site to document the progress of this project; the full text of these broken treaties is also presented. More information is also available his official art site.
Tweet