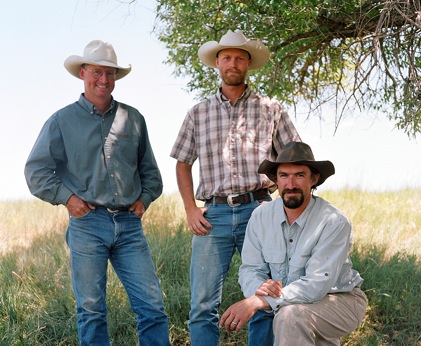 On this particular 8,000-acre section of the Plains there is a single light in view, coming from inside a trailer. Bustling about camp are three men — cowboys, you’d probably call them. They certainly look the part, dressed in boots and wide-brimmed hats, one of them splitting old fence posts with an axe to build a campfire, another working on some beef for dinner. They call this pasture Horse Creek for the water running down its center, and on it they have 1,100 yearling cattle.

And yet, for these men the bovines are only a means to a greater end. According to the unofficial ringleader, Jim Howell, their goal is nothing less than helping the world to avert a looming global catastrophe. What they’re doing here is not just herding cattle; they are starting what they call “The Brown Revolution.”

• In another national publication, Peter Hessler offers a vignette of rural healthcare we don’t often see. Many thanks to Chuck Shuford for the tip:  “Dr. Don: The Life of a Small-Town Druggist” appears in last week’s New Yorker:

Don Colcord has owned Nucla’s Apothecary Shoppe for more than thirty years. In the past, such stores played a key role in American rural health care, and this region had three more pharmacies, but all of them have closed. Some people drive eighty miles just to visit the Apothecary Shoppe. It consists of a few rows of grocery shelves, a gift-card rack, a Pepsi fountain, and a diabetes section, which is decorated with the mounted heads of two mule deer and an antelope. Next to the game heads is the pharmacist’s counter. Customers don’t line up at a discreet distance, the way city folk do; in Nucla they crowd the counter and talk loudly about health problems.

“What have you heard about sticking your head in a beehive?” This on a Tuesday afternoon, from a heavyset man suffering from arthritis and an acute desire to find low-cost treatment.

• Long time readers will no doubt be familiar with Folkstreams, a phenomenal resource with a mission to “build a national preserve of hard-to-find documentary films about American folk or roots cultures” and “give them renewed life by streaming them on the internet.” Here’s a recent addition, Mr. Jimmy’s Birthday Challenge; the trailer follows below, with the full available for viewing on the Folkstreams site.

When Mr. Jimmy Moore challenged himself to run 80 kilometers in 1 day for his 80th birthday, his small Mississippi town got behind him to see if they too could “run their age,” from age 8 to 80. Mr. Jimmy’s quest reveals how a retired railroad man-turned extreme athlete could face the death of his wife and the limitations of his aging body to “enjoy life right up to the end.”