James Magee and The Hill

Posted by admin on Thursday, September 9, 2010 · Leave a Comment 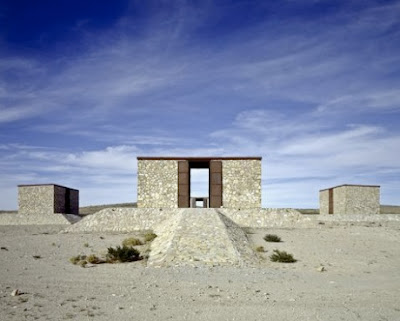 photograph by Tom Jenkins, via Granta
“Everybody who has been [there] divides their lives into two parts: before and after they’ve seen The Hill.”
– Rick Brettell, co-author of James Magee: The Hill
Ninety miles east of El Paso,  deep in the West Texas desert, lies one of the most elaborate and, until recently, unsung American art installations — The Hill, a site 25 years in the making and 15 years from completion. With Revelation: The Art of James Magee opening at the Nasher Sculpture Center in Dallas, an opportunity has emerged for the public to begin to encounter–from a comfortable, air-conditioned distance–what only a few people have experienced. It’s also a chance to learn about the artist; here’s an introduction from The Hill’s official site:

For more than a quarter of a century, the American artist, James Magee, has been engaged in a massive, largely secret, almost solitary endeavor in the vast plains of West Texas. A Michigan-born, Ivy League-educated lawyer, Magee’s unusual trajectory through New York taxi driver and off-shore roughneck led him to make his home in El Paso, Texas, a border city made up of equal parts Mexico and the U.S., where, ﬁttingly, he produces a vast body of work both under his own name and under the names of Annabel Livermore and Horace Mayﬁeld, liminal identities in a liminal place. A painter, sculptor, poet, ﬁlm and video maker, widely featured in museum and gallery exhibitions across the U.S. from the Yale University Art Gallery to the Santa Monica Art Museum, Magee here reveals himself to be an architect, engineer and builder as well.

While following the link above will offer perhaps the most detailed description available of The Hill, this provocative essay by Pamela Petro, published in Granta, attempts what seems to evade much of the reportage on Mr. Magee and The Hill–that is, it tries to use language to approximate an experience that defies description or summary. Here’s Ms. Petro approaching the site:

Somewhere on the road ahead, Jim Magee is chatting through a translator with China’s Minister of Culture. Like me and the group of people I’ve been travelling with, the Minister wants to see Jim’s Hill.

‘It’s, ah, well, um…Jim’s like an onion,’ were the words that came out of my friend Alan’s mouth when he picked me up at the El Paso airport last night. I wanted to hear about The Hill, but Alan could only touch on the layers of its creator. ‘You’ll see for yourself,’ he finally said.

Fair enough. So far I have only basic facts in a notebook: James R. Magee, a sixty-two-year-old Michigan transplant by way of New York, city and state, has since 1982 acquired 2000 acres in the desert outside of El Paso. On it he has created…what? I don’t know. Something that reduces articulate art historians to murmuring wonder. Something large and multifaceted and of the land, but not Land Art, in the sense of a particular environment manipulated to human design. A work capable of making adults weep and begetting terror in its viewers, even nightmares. From the awkward descriptions I’ve heard, The Hill seems insistent on resurrecting the word ‘awe’, allowing it to once again summon ‘solemn wonder tinged with latent fear’.

Here also is an interview segment with Mr. Magee from the Art & Seek program, which covers the arts and culture of North Texas. While this interview (beginning at 16:50) is not entirely satisfying, it (again) adds a layer of approximation to the experience of The Hill.
While this piece comes out of a different sort of experience than many of the rural artists we’ve covered, and while it has a complicated relationship to rural place that may not be as intimate (in some ways) than modern artists we’ve discussed such as David Lundahl, James Magee may deserve to considered alongside those artists, musicians and writers for the ways in which local place has directly come to bear on how The Hill has been sculpted and articulated. If Mount Airy gave birth to a particular style of music, then, judging from Mr. Magee’s reverence for these West Texas plains, there’s something just as honest and site-specific about The Hill.
Tweet