Julianna Barwick And The Magic Place 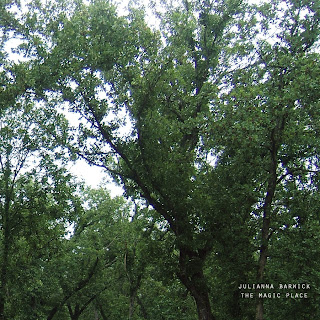 cover art for Julianna Barwick’s The Magic Place LP
After reading yesterday on the excellent Twittering Machines blog about a recent collaboration between Julianna Barwick and sound-artist Ikue Mori, I was taken back to Ms. Barwick’s The Magic Place, which was released earlier this year to stellar reviews. It’s worth considering her music alongside that of Gillian Welch, as I sense it might challenge some preconceived notions (admittedly, in this writer as well) about what we are comfortable considering “rural art.”
Here’s Ms. Barwick’s record label,  Ashmatic Kitty (co-founded by Sufjan Stevens), describing the unique elements of her sound:

Julianna Barwick’s experimental soundscapes are in part informed by her experience growing up in Louisiana and Missouri, singing weekly with her church congregation and school choirs. Her loop-based compositions replicate the soaring textures of a large choral group using only her voice, a loop station and some occasional instrumentation. Barwick starts her songs quietly, usually with a single refrain, and then builds the pieces up until she’s created a complicated, weaving sonic architecture. Her extraordinary range and vocal technique propels the music into a variety of different emotional spaces, from feverish to tranquil.

As we learn, Ms. Barwick’s new record is an extended mediation on rural place, specifically her family’s farm:

“The Magic Place was a tree on our farm,” says Louisiana-raised Brooklynite Julianna Barwick. “It was in the back pasture. It was one tree that grew up, down and around. You had to crawl in and once you were inside, it was like there were different rooms, and you could actually lay in the branches. We named it ‘The Magic Place’ because it really was magical—especially for a kid… and that’s how I feel about my life right now—without trying to sound too hippy dippy or cosmic, this year has definitely been a magical one.”

While this is a long way from “Time (The Revelator)” or any of Gillian Welch’s work, there may be an aesthetic here, and a relation to place, that is remarkably similar. Consider Mark Richardson’s thoughtful and enthusiastic review in Pitchfork; how many of his descriptors could also be applied to the music of Gillian Welch?

…her music feels homemade. We know that she spent a lot of time in church as a kid, so it’s tempting to think of her work as a digital update on sacred hymns. The heavy reverb and layering brings to mind cathedrals, light refracted through stained glass, some kind of surrender to or celebration of the eternal. But while Barwick can seem to be reaching for these grand themes and overwhelming statements, there’s something in her music that brings it back down to earth. It feels human, imperfect, and intimate, and the line of communication is one-to-one. Despite her music’s often epic sweep, it can feel like she is whispering in our ears. So the sense of the sublime, which permeates every note of her material, ultimately works on a humble scale.

Unlike Ms. Welch, Julianna Barwick comes from rural America, and she would number among what we’ve called before “the rural diaspora” of artists and citizens. With that said, I imagine that many of us would be more comfortable placing Gillian Welch in a “rural” frame, which says a great deal about what stylistic attributes we value (and want others to value), and how we define “rural art” in distinction to urban forms.

As mentioned in the earlier commentary on Gillian Welch, what both of these musicians achieve is an unraveling of easy rural-urban binaries; as listeners, we have to follow their lead. When we imagine rural identity as a cultural or social marker (see the Irish, for example) and not as a fixed geographical term, then (again, see Irish arts and culture) everything becomes richer and more inclusive.

As I also mentioned in that previous piece, it will lead to some challenging conversations, but perhaps also some moments when we can see a continuum of expression and lived experience–if we placed The Magic Place alongside One Hundred Years of Solitude, or a novel by William Faulkner, or, closer to home, the church music of Ms. Barwick’s youth. Even a consideration of Sacred Harp music, so different on many material levels,  would open up an interesting discussion of the ways the two musics share similarities but also telling historical, cultural, and community-based differences:

As we learn below, some vibrant interchange is at play here. See this PGTC video that documents the ways young singers–in particular young urban singers–are taking interest in Sacred Harp. Again, it’s an introduction to an encouraging and complicated story that seems to shine a light on the music of Julianna Barwick:
Tweet