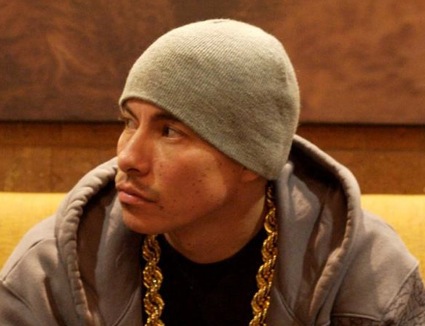 Supaman; from the artist’s MySpace page
Yesterday on NPR’s All Things Considered, Taki Telonidis of The Western Folklife Center reported from Crow Nation on a powerful cross-cultural and rural-urban story: the life, times, and music of rapper Supaman. Here’s how the piece begins:

In southeast Montana, thousands of miles from the birthplace of hip-hop, a man with the given name Christian Parrish Takes the Gun has been rapping to young people on the Crow Nation reservation. He calls himself Supaman, and he’s been merging inner-city music with more local concerns for more than a dozen years.

“Native Americans grasp that culture of hip-hop because of the struggle,” he says. “Hip-hop was talking about the ghetto life, poverty, crime, drugs, alcohol, teen pregnancy; all that crazy stuff that happens in the ghetto is similar to the reservation life. We can relate to that.”

Supaman was courted by record labels in the early 2000’s for his brand of gangsta-rap-meets-rez-life, but a fateful encounter on tour led to a conversion experience for the artist; his mature work considers how faith, culture, and place can lead the hip hop genre in new directions.
Supaman is not alone, though, in creating fresh and provocative music within the Native American community – evidence of further Native hip hop musicians can be found on the Native Hip Hop site.
More broadly, I’d encourage a visit to Revolutions Per Minute (RPM), a site that provides “a centralized place for emerging and established Indigenous, First Nations, Aboriginal, Inuit, and Métis musicians to share and promote their work.” Since debuting this summer, RPM has offered a dizzying array of musicians — and the site itself is gorgeous, completely interactive, and linked to every relevant social media platform. Across the rural arts (and beyond) we could learn a great deal from how RPM is spreading its message.
Below I’ll include Supaman’s video for “Sabatage,” featuring Deadly Penz. In addition, here’s a group I discovered via RPM: A Tribe Called Red. These electronic musicians’ work is informed by hip hop, and traditional folk forms, but they have created a style all their own. The track below, “PowWowzers,” features the acclaimed drum group Northern Cree as well as samples of comedian Clarence Two Toes: