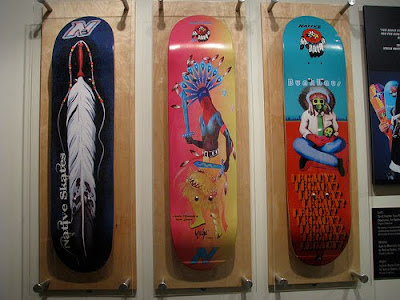 Ramp It Up: Skateboard Culture in Native America is an exhibit that began last year at the National Museum of the American Indian and is now on display at the George Gustav Heye Center in New York. Here’s a brief introduction from the NMAI:

Ramp it Up celebrates the vibrancy, creativity, and controversy of American Indian skate culture. Skateboarding combines demanding physical exertion with design, graphic art, filmmaking, and music to produce a unique and dynamic culture. One of the most popular sports on Indian reservations, skateboarding has inspired American Indian and Native Hawaiian communities to host skateboard competitions and build skate parks to encourage their youth. Native entrepreneurs own skateboard companies and sponsor community-based skate teams. Native artists and filmmakers, inspired by their skating experiences, credit the sport with teaching them a successful work ethic. The exhibition features rare and archival photographs and film of Native skaters as well as skatedecks from Native companies and contemporary artists.

The exhibit has been receiving stellar reviews for its use of various media to tell the story of skateboarding culture in these communities, and one of the filmmakers invited to participate, Dustinn Craig, has made his contribution available for view online. You can view this interview with The Smithsonian. Here’s Mr. Craig describing the video installation below:

This 8 minute experimental film was featured in a collaborative exhibition between the National Museum of the American Indian in New York and the Heard Museum in Phoenix Arizona. The exhibit was on display from October of 2007 though September 2008. The film was projected on a wall in HD and surrounded with walls decorated with skateboard decks from the last 10 years. This film is a personal portrait of 2 incredibly adaptive cultures, one very ancient and one still evolving, yet both are indigenous to North America. Skateboarding and Native American Culture.The Apaches portrayed in this film are White Mountain Apache Scouts of the 1880’s, and they are depicted by young Skateboarders from the community of Whiteriver on the White Mountain Apache Indian Reservation in Arizona. The footage spans the last 15 years of skateboarding on the Reservation, and depicts a very specific group of skateboarders that have grown up in the same culture and environment. This is an effort to portray two fluid cultures in constant motion.

The italicized quote which begins this piece is from Apache Skateboards team leader and founder Douglas Miles, from an excellent article by Kathy Wise published in Cowboys & Indians magazine. Follow the link to their site to explore more of their skateboard artwork and to find a comprehensive list of articles and resources.