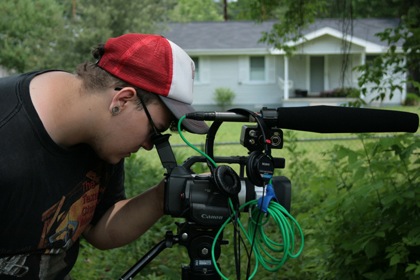 An AMI participant
Last week the Appalachian Media Institute hosted a screening of their 2011 filmmakers’ work. These new documentaries are on view on their Vimeo page and also accessible via the AMI Facebook page. For folks who haven’t experienced the Institute’s work before, here’s how they introduce their work:

Appalshop is a multi-media arts and cultural organization located in Whitesburg, Kentucky that strives to develop effective ways to use media to address the complex issues facing central Appalachia – a declining coal economy, a legacy of environmental damage, high unemployment rates, and poor educational opportunities and attainment.  In 1988 Appalshop staff members founded the Appalachian Media Institute (AMI), a media training program for central Appalachian youth.  Using the technological and artistic resources of Appalshop, AMI helps young people explore how media production skills can be used to ask, and begin to answer, critical questions of themselves and their communities.  With opportunities to have input into community dialogues, and frame those dialogues themselves, young people develop the skills and critical thinking abilities necessary to become leaders in creating sustainable futures for their communities.  Since its inception AMI has directly engaged over 600 young people in media production.

One of the new AMI films is A Little Piece of Me, a short documentary that follows three gay and lesbian youth in eastern Kentucky as they share their stories and consider their place in their local communities. This piece was produced by Destiny Caldwell and Savannah Swiney:

A Little Piece Of Me from Appalachian Media Institute on Vimeo.

The AMI site hosts an archive of work from previous years as well, including Banjo Pickin’ Girl, a 13 minutes film produced by Machlyn Blair, Stacie Sexton, and Halley Watts. This piece tells the story of Stacie Sexton, who is working to learn the banjo–the instrument for which her grandfather Lee Sexton and departed father Phillip Sexton were well known throughout Appalachia and beyond. The three filmmakers tell a moving story of coming to terms with the loss of a father through a family’s musical inheritance:

There is such a phenomenal range of work that emerges from AMI each summer and, just like the youth who participate, it reflects a wide range of interests and perspectives. Instead of posting a flurry of Vimeo clips here, I encourage folks to travel to the AMI Vimeo page to explore these films. There you’ll find the new films Up In Coots Hollow, which traces a family’s connection to the land across generations, and Missing Generation, which tells the stories of local youth who have been raised by their grandparents.
Tweet