Girls with banjos; Veazie, Maine circa 1900-10; Maine Folklife Center Collection
By Alyce Ornella, North Country series Editor
Maine exists in an in-between place in the American consciousness.  Well worn imagery of lobsters and long winters instantly are called to mind by many, yet the state lies so far north of New York and Boston that few beyond the eastern urban centers have visited, let alone chosen to live here.  Like many rural places, Maine is often defined by imagery that is intrinsic to its heritage, yet it becomes lost in translation when transmitted beyond its borders.Buried beneath the lobsters and lighthouses that dot the collective imagination lies a secret: country music has always been a part of the vernacular landscape of Maine, from the pre-radio days through the present.  While the perception exists that Nashville brought country music to the rest of the nation, rural music has always been performed in the kitchens, gatherings, and grange halls in communities from one far corner of the United States to another.   Nashville’s voice — and the voices of those who moved to the city from all over the country in order to be from Nashville — became loudly amplified in the era of mass produced recordings, radio barn dances, and powerful transmitters that beamed the sounds between south and north.  Here begins a complex dialogue expressed through the language of country music and pulled by the tensions of tradition, commercialization, and regional identity. 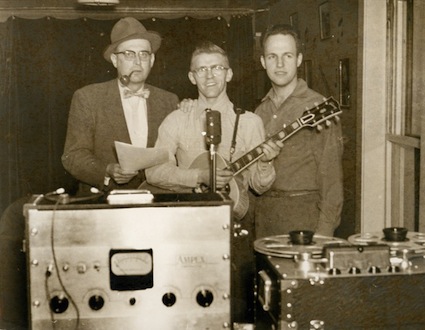 Al Hawkes (right) in the Event Records studio, ca. 1956; collection of Al Hawkes
Over the summer, we’ll be sharing the roots of Maine and New England country music through stories, sounds, and images that illuminate this little known cultural history.   Our series will explore how country music and radio become a means for Maine to connect with the rest of the country, and helped create the crisscrossing connections between Northern and Southern musicians on a path that connected two far-apart regions.Some of the histories (and even present days) this series will share include:- A young radio enthusiast who built a pirate station in his family’s barn, and went on to create a regional country music empire.

– A family of performers who encountered both fame and tragedy as their journey in search of stardom took them from the shoe factories of Maine to West Virginia, Nashville, Canada, Los Angeles, and back.

– One of the very few documented interracial country music duos on either side of the Mason-Dixon who performed before the Civil Rights Era.

– The yodeling cowboys of New England.

– From the Crown of Maine, a deep voiced balladeer who brought the genre of truck driving songs to listeners across the country.

Like many of their southern counterparts, these musicians were deeply invested in their craft and some even dreamed of making in that Music City of Nashville — and some had the chance, but walked away.  Their legacy illustrates that country music exists as an expressive force undefinable by state lines nor immutable boundaries of cultural ownership.