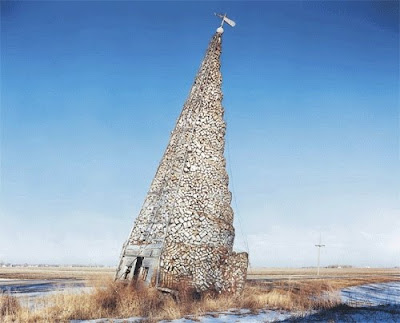 Tin Can Pile, US 10, Casselton, North Dakota.  Photograph by Jim Dow.
The Museum of Modern Art is undoubtedly one of the finest arts institutions in the world, and, if you are enthusiastic about the arts, its reach is difficult to escape. It’s hard not to go to arts events, to read arts magazines and blogs, or even to go out on the town, and not see a reference in one form or another to the wonderful and ubiquitous presence of MOMA. But what if our nation had MORA, a Museum of Rural Art? I’ve been thinking lately about how such an endeavor would differ in form and function from what we conventionally expect from a museum space.
The first step in such a venture would have to be to re-orient the viewer to the art, and to de-centralize the experience: to bring art out of (for many in the audience) hard-to-reach urban centers and into real-life communities, where the imaginative value of the artwork might have a chance to cross-pollinate with local ideas and local practice. The North Dakota Museum of Art is way ahead of the curve in this regard. They are currently featuring touring exhibitions that are bringing art into rural regions of the state. Their Rural Arts Initiative has worked for four years to place these exhibits in schools and community buildings, all the while integrating it into lesson plans and local dialogues. The Museum provides this service for no charge, and its educators and staff take an active role in all stages of the process. In their own words this Initiative

works to encourage and empower rural school students and their teachers to actively participate in learning through the arts. Rural School Initiative came about in direct response to feedback from educators and families working in rural areas. Major challenges such as inadequate funding for art education, few museums and great distances have not allowed the visual arts to flourish in rural areas as much as other forms of art such as music and theatre, which accompanied early settlers as they moved west.

Some of this flourishing is evident in the current exhibition Marking The Land: Jim Dow in North Dakota. A resident of Boston, where he is a professor art, Mr. Dow has spent  a great deal of time in North Dakota since the early 1980’s, and the work on view in the interactive gallery speaks to the ways in which a searching and compassionate artistic eye can trump any of the questions in being an “outsider” to the region: the photographs do indeed offer, in the Museum’s words “a stirring photographic tribute to the complex and unyielding landscape of North Dakota.”
Mr. Dow’s work is just the beginning. There’s much more fine work to explore on the Museum’s site, including Snow Country Prison: Interned in North Dakota. This exhibition of photograph tells the story of how Fort Lincoln in Bismark became an internment camp for German and Japanese citizens. There’s so much more worth commenting on in this exhibit and throughout the Museum site; it’s well worth visiting and revisiting.
Tweet