Notes From The Field: The Hayloft Gang and Early American Radio

By Jennifer Joy Jameson, Notes From the Field series Editor

If you’re hooked into some of the recent the films showing on PBS, you may have heard about or seen The Hayloft Gang: The Story of the National Barn Dance, a documentary produced and directed by Stephen Parry, which premiered on public broadcast television stations in the fall of 2011. Narrated by Garrison Keillor, the film highlights the rise of WLS Chicago’s National Barn Dance, one of the most popular and influential programs on early radio.

When I first heard about the film I was finishing graduate school, researching country music. I knew that it was airing on my local Kentucky Educational Television, and even that one of my professors, Michael Ann Williams, provided commentary in film, yet without television access I had no way to see the film. So, it came and went.

The cast of the National Barn Dance, 1937; The Hayloft Gang
Because of stories similar to my own, the producers of The Hayloft Gang have recently launched a crowd-source funding campaign with United States Artists, now through December 31st, in an effort to raise the funds for music rights and the clearance to allow the film’s distribution beyond PBS via digital downloads and DVD. With that funding, the documentary can be screened in schools and libraries, and be made accessible to the general public.
I believe The Hayloft Gang is worth watching and supporting because, to start, it challenges our common notion that Nashville and the American South are the origin point for country music—both traditional and popular. First broadcast in 1924, and spending its 36-year lifespan in the heart of Chicago, the National Barn Dance was truly a “national” event, as it preceded Nashville’s Grand Ole Opry by nearly two decades, and brought together mountain string bands, folk balladeers, polka trios, and cowboy singers from coast to coast. It also established the careers of a broad range of musicians—from the Appalachian ballads of Bradley Kincaid, to the Western sounds of Patsy Montana and Gene Autry, to the high-powered, Midwestern yodels of the Cackle Sisters. 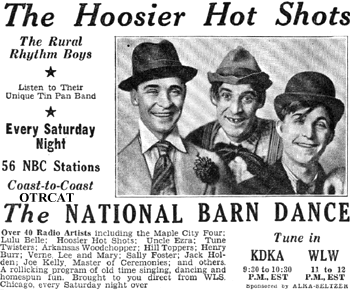 The National Barn Dance was unique in that it offered something for both its rural and urban constituents. Farming families would tune in to the program to get a sense of the pulse of the nation. It also spoke to the thousands of migrants who moved from the farm to the city to find new work and new ways of life in an increasingly changing society. As one of the first radio programs to have a live audience, urbanites packed into Chicago’s Eighth Street Theater each week to relive the square dances of their agrarian past. With equal listenership in both the country and the city, it was precisely the advances of radio technology that helped sustain the musical traditions of the past, and revived it in dynamic ways for a diverse audience, including immigrants and other newcomers.
The Hayloft Gang includes rare film footage and home movies pulled from the archives of the Country Music Hall of Fame and Museum, and UNC’s Southern Folklife Collection, among other respectable repositories. It also benefits from the historical and cultural context provided by some of country music’s most noted scholars, and—perhaps, most importantly—insights and anecdotes from a few of the former listeners and performers. One of the film’s best moments includes the memories and scrapbook photos of a former listener of the program named Helen Geels Loshe, a member of the Geels Family Band in Indiana. Helen recalls how, after seeing Patsy Montana in some of the National Barn Dance fan magazines, she tried to dress like Patsy by cutting up and painting her work boots to look like proper cowgirl boots. The personal narratives collected in the film reveal the depth of the radio show’s influence in a more profound way than any other possible measurement.
Director Stephen Parry articulates the necessity of this collaborative fundraiser:

Our goal has always been to bring The Hayloft Gang to audiences beyond public television. […] We’re grateful to have received some prestigious grants from the National Endowment for the Arts, ITVS and other donors, but with recent cutbacks in arts funding, this just hasn’t been enough. Our production budget only covers the costs to license and clear the music rights for a limited PBS broadcast.

As in the crowd-funding tradition, supporters can receive some great rewards for their financial support. All donations made through USA Projects are tax deductible and eligible for matching funds. Read more about the film on The Hayloft Gang website.
The Hayloft Gang on USA Projects from Image Base on Vimeo.
Tweet