Occupy Rural: Its Place And Its Possibilities 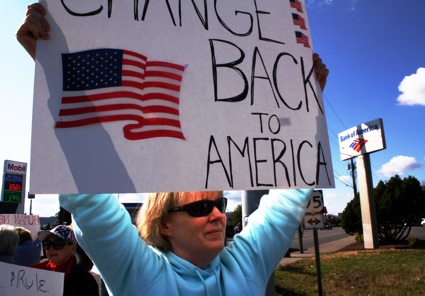 This last weekend, as I’ve mentioned previously, I had the honor of presenting The Art of the Rural at the BIG FEED, a “regional social” of art, music, and rural culture organized by the M12 group of artists. Unbeknownst to me, two events happened during this weekend which have led me to consider again the rural element to the Occupy movement — both its challenges and its extraordinary potential.
I say this first: my opinions on this subject are purely my own and they do not necessarily reflect the opinions of anyone else associated with AOTR. My editorial logic for covering the Occupy movement, as opposed to the Tea Party, is that — as responsible journalists are reporting — this is still an amalgamous, decentralized and non-partisan group of citizens. The minute that this becomes aligned with a traditional political party is most likely the minute that it loses most of its cultural imperative. As it relates to this site, I am more interested in writing about people than political parties; at this point, this is an extraordinary and moving example of people uniting across generational and class lines.
To return, I was interested how, during the BIG FEED, the Occupy movement was referenced alternately with curiosity and passion by both local presenters and folks who have flown from far away to attend the event: rural people, members of the rural diaspora, and even their supporters in urban areas, are all thinking about how this movement might be applied to the countryside. Last week we offered one example from southern Missouri, complete with Rachel Reynolds Luster’s take on the events. 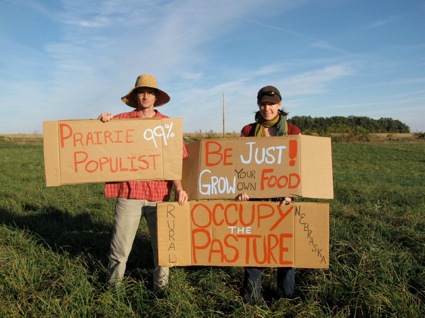 Steph Larsen and Brian DePew Occupy The Pasture; photograph Steph Larsen
In a moment of synchronicity, just as such a dialogue was percolating around the edges of the BIG FEED on the Colorado high plains, I received an email from Anna Culver informing me that an Occupy Rural group [Twitter: @occupyrural] was online, collecting “storylines” via toll-free phone that they would present via Soundcloud. Here’s the introduction to this storytelling project:
Another Test by occupyrural
Occupy Rural also maintains a Facebook presence, and they ask that readers submit their stories to the ever-expanding tumblr page We Are The 99 Percent. If folks haven’t seen this tumblr page yet, I highly recommend a visit; it’s the best articulation of what concerns this movement.
At the BIG FEED I had the opportunity to meet Mimi Zeiger, the editor and publisher of loud paper and a leading voice on art, architecture, and urban space, and she offered within her talk some inspiring examples of how artists and citizens are reclaiming public space — ideas which readers can find in her Interventionist Toolkit series published online at Places. We had a chance afterwards to talk about the connections between interventionist art and the Occupy movement, and Ms. Zeiger later alerted me to a piece by New York Times architecture critic Michael Kimmelman that holds real possibility for folks who want to think through the potential for a rural Occupy movement.

“In Protest, The Power Of Place,” will resonate with many of our readers because it’s less interested in politics than how place and community serve as a movement’s lasting source of power. Instead of the expected myriad of demands at Occupy Wall Street (or beyond), Mr. Kimmelman tells us, “the encampment itself has become the point:”

And it was obvious to me watching the crowd coalesce over several days that consensus emerges urbanistically, meaning that the demonstrators, who have devised their own form of leaderless governance to keep the peace, find unity in community. The governing process they choose is itself a bedrock message of the protest.

It produces the outlines of a city, as I said. The protesters have set up a kitchen, for serving food, a legal desk and a sanitation department, a library of donated books, an area where the general assembly meets, a medical station, a media center where people can recharge their laptops using portable generators, and even a general store, called the comfort center, stocked with donated clothing, bedding, toothpaste and deodorant — like the food, all free for the taking.

To modify Mr. Kimmelman’s language, how might “consensus emerge ruralistically?” Herein lies the reason that I feel that the Occupy movement could hold even greater possibility for rural place and rural citizens: we see a drastically different sense of geographic and community scale in rural places, and we may find that — despite coming from different ideological backgrounds — the Occupy movement in rural America could allow for folks to not only raise awareness of pressing, unacceptable, national problems but also to work as a community to solve them on a local level. Certainly, this can also happen in a city, though, as I know from a few years in living in Boston, it is too easy to retreat back into our physical and cultural neighborhoods. In rural America, such retreat is impossible. We have to see each other. We have to work together.
This is already evidenced in the diverse group of Occupy rural folks we previously covered; the solutions they proposed were singular, sensible, and non-partisan. Tomorrow I will continue this commentary on the rural Occupy movement with a look at these solutions, and the rhetoric of its urban counterparts.
Tweet