On The Map: Server Farms In Rural America 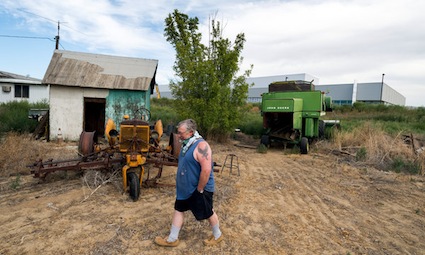 Today we share this story featured on The Rural Arts and Culture Map. Folks can learn more about how to join in this project here.

Surrounded by desert, Quincy, Washington is a fertile town that has sustained a rich farming community for generations. In 2006, Microsoft purchased 75 acres of Quincy bean fields on which to construct a new “server farm,” a massive data hardware facility containing the Internet’s inner organs. Sitting not far from the Columbia River, which is dotted with several hydroelectric dams from source to mouth, Quincy attracted the technology conglomerate with access to a continuous and powerful energy source as well as unusually low electricity costs. Writes James Glanz of The New York Times:
Over the last few years, Quincy has become an unlikely technology outpost, with five data centers and a sixth under construction. Far from the software meccas of Northern California or Seattle, Quincy has barely 6,900 residents, two hardware stores, two supermarkets, no movie theater and a main drag, State Route 28, whose largest buildings are mostly food packers and processors. Its tallest building is a grain elevator…We thought that Microsoft would bring a certain air of class to our town,” said Danna Dal Porto, a retired teacher.

But the town and the company almost immediately began having disagreements over Microsoft’s excessive energy use, and the title of Glanz’s article, “Data Barns in a Farm Town, Gobbling Power and Flexing Muscle,” well summarizes its five pages of content as well as the oft-told story of small-town-versus-big-time businesses in rural America.