Photographing Rural Maine, Beyond The Vacationland 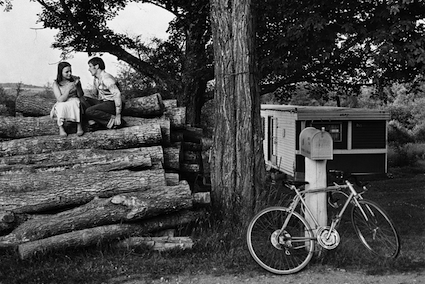 Gregory Gives his Cousin Lori a Rose, 1983; Steven Rubin
This month TIME Magazine’s Lightbox photography section highlights the work of Steven Rubin and his 30 year project in Somerset County, Maine — the fruits of which are currently on view at the drkrm gallery in Los Angeles.
Tara Godvin, writing in Lightbox, outlines the dimesions of this extended meditation on place and culture which began with a hitchiking ride to rural Maine in 1982:

A graduate from Reed College with a degree in sociology, Rubin had originally come out to the East Coast from Oregon to enroll at the then Maine Photographic Workshops (now the Maine Media Workshops) in Rockport. After documenting the effects of the early 1980s recession on families nearby, he wanted to see how the economic downturn was being handled by locals far from the highways, historic lighthouses and second homes of the Maine coast. On a tip from a friend, Rubin headed inland and settled upon an abandoned shack as his home base and a schedule of hitching four to eight hours between the countryside to take pictures and Rockport to develop them.

Taking prints back to his subjects as a thank-you for their time and trust, Rubin was eventually let into the lives of local families—as well as some of their homes to crash on floors and couches—as he continued his work throughout Central Maine.

What he has witnessed is a part of the country largely unbuffeted by the usual economic ups and downs seen elsewhere. For many in the area times are always tough. According to the U.S. Bureau of Economic Analysis, per capita income has been increasing in Somerset County but has ranked at or near the bottom among Maine’s 16 counties throughout the many years of Rubin’s project. Residents get by through resourcefully cobbling together seasonal and part-time jobs, hunting, fix-it know-how and the support of their communities.

“When I met some of these families, I was completely in awe of them in many ways,” said Rubin, now an assistant professor of art in the Photography Program at Penn State University. “I think as an outsider and someone who didn’t have the background that they did, I was really quite taken by how they survived, by their strength, by their resourcefulness.”

Please find Tara Godvin’s full article, with a generous slideshow of Steven Rubin’s work, at TIME Lightbox. Many thanks to Alyce Ornella of the Spindleworks Art Center in Brunswick, Maine for leading us to this work