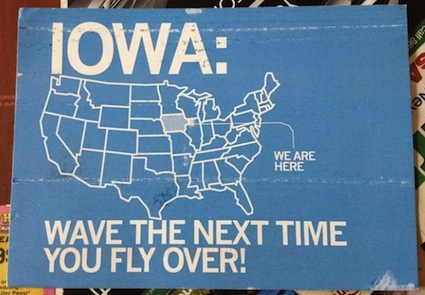 Iowa: Wave The Next Time You Fly Over; t-shirt design by Raygun
We’re grateful to start off the week with news of coverage of Art of the Rural in two well-respected publications. Many thanks to these writers for sharing our work!
• For years we’ve admired the writing of Kyle Munson, a columnist and general Iowa-culture expert for the Des Moines Register. On Sunday, he wrote about a new publication by the design-savvy team at Iowa City’s Raygun, a collection entitled The Midwest: God’s Gift To Earth.
At the close of Munson’s meditations on this region’s global presence, he turns to AOTR contributor Kenyon Gradert for the kind of critical perspective found in his Course on Midwest Culture series:

That brings me around to Kenyon Gradert, an English doctoral student at Washington University in St. Louis and a writer for the Art of the Rural — a guy who spends serious time pondering Midwestern identity.Midwesterners have “that reflection about them,” Gradert said. We’re “hardworking but not too flashy, not too rambunctious or rowdy as some may perceive Southerners to be.”

I like how he characterizes us at theruralsite.blogspot.com as a blank canvas for the rest of the nation: “A Midwesterner is more American than Midwestern, at least in mythic identity.”

Gradert grew up on a northwest Iowa cattle and grain farm outside Ireton. With public input from the blog he’s democratically cultivating a new course on Midwest culture that he hopes to teach within the next few years.

Folks can enjoy Munson’s full column here and are encouraged to check out Kyle Munson’s Iowa Map.
• We are also honored to have received mention by Ian David Moss in Createquity, “a hub for next-generation ideas on the role of the arts in a creative society” that cultivates an online presence as a “virtual think tank exploring the intersection of the arts with a wide range of topics including politics, economics, philanthropy, leadership, research, and urban planning.” Simply put, this is an outstanding resource with a thought-provoking perspective. Folks should add it to their feed and follow along on Facebook and Twitter.
Moss is also the Research Director for Fractured Atlas, an organization that connects artists, arts organizations and cultural practitioners in efforts to create “a more agile and resilient cultural ecosystem.” I imagine that many of our readers may already be familiar with the work of Fractured Atlas; if not, I encourage folks to visit their site and learn about the range of programs and opportunities they offer to artists and organizations. Joining the community at Fractured Atlas only takes three minutes.
Given the interdisciplinary and cross-sector ethos of Moss’s work, we’re grateful to be included in the conversation on Createquity. Folks can also follow this site on Facebook and Twitter. We’ll include below his thoughts on The Rural Arts and Culture Map:

One of the tragic consequences of our field’s fragmented funding infrastructure is that support for the arts tends to be concentrated in large urban metros. While especially apparent in funding for art projects themselves, it applies equally to research about the arts, which means that creative activities in rural areas fly even further under the radar than they would otherwise. A new project called the “Rural Arts and Culture Map” aims to do something about this by crowdsourcing stories, media, and video testimonials about art in the boonies.