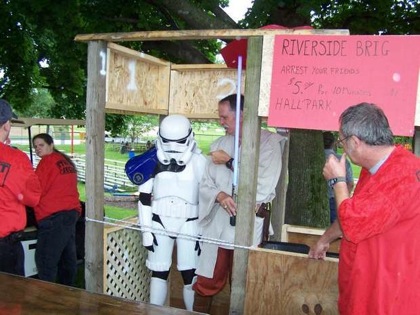 The brig at the 2011 Trekfest; Rob Daniel, The Press Citizen
When I was recently traveling through Iowa on my way to the National Rural Assembly I had the chance to spend an evening in Riverside,  a small-town about 20 miles south of Iowa City. Simply put: Riverside is a beautiful place. It’s benefitted from both a strong sense of community pride and from an influx of revenues generated by a riverboat casino built a few miles east of downtown. For better or worse, when politicians talk about “small town America,” Riverside is the kind of place they envision: clean streets, well-kept parks, and a host of local businesses.
Anticipating the Assembly, I was particularly conscious of the larger narrative that’s often stretched over our rural places. Riverside has found an ingenious way to deal with this issue. I’ll include below the text from the Riverside Area Community Club’s Assignment Earth: Trekfest 2011 brochure:

Stephen Whitfield and Gene Roddenberry’s book, The Making of Star Trek, stated that Kirk “was born in a small town in the state of Iowa.”

In 1984, Riverside City Councilperson Steve Miller wrote to Gene Roddenberry requesting that the small town in Iowa be Riverside.

Through city proclamation, TV, radio, magazine, and newspaper interviews (including The Wall Street Journal) and with certificate of commendation from Gene Roddenberry himself, Riverside has become known for this historical event!

On March 25, 1985, the Riverside City Council voted unanimously to declare a spot behind what used to be the town’s barber shop as the “future birthplace” of Star Trek’s Captain James T. Kirk, commander of the spaceship U.S.S. Enterprise, NCC-1701.

While YouTube abounds with video from Trekfests past, Allen Huffman’s video montage below is a fine introduction, though you may need to mute the sound:

While I can’t help but applaud Riverside for the creative way in which they landed their community on the intergalactic map, I’m also interested in Trekfest for what I see as a convergence of two somewhat related forms of nostalgia. While the primary strain, of course, relates to the long-since-departed television show, there’s also the kind of nostalgia that Mr. Roddenberry and Whitfield encoded into the character of Kirk: the boy who must leave his rural roots behind to better himself and, in this case, save the universe. This mixture of local pride, nostalgia, and assertiveness aimed toward the larger urban centers is common to many small towns from which a noted leader emerged; it’s echoed in Riverside’s town motto: where the trek begins.
From this perspective, it’s startling the number of pop-culture narratives that also follow this model of a character rising from a solid and safe rural upbringing only to leave behind the community to face greater challenges: see Superman, Citizen Kane, all the way to science-fiction blockbusters such as Star Wars or The Lord of Rings.
While, in a political context, this is still a powerful metaphor, I wonder if another part of the nostalgia that draws folks (including myself) to something like Trekfest is that it’s a story we’re no longer telling, a story that’s a remnant of a moment in American culture when small town life had a different kind of hold over an audience’s collective imagination (as, by mid-century, many urban viewers would have been part of the rural diaspora). Has a kind of reality-television, or riches-to-riches narrative, replaced the humble arc to greatness of James T. Kirk?
Consider the map below, by Kenneth Johnson of The Carsey Institute, excerpted from a must-read article published in The Daily Yonder. The colors on the map correspond to the number of years between 1956 and 2009 that deaths exceeded births in rural counties; the darker the color the deeper the decrease in population. (see the The Daily Yonder for more information and larger graphics): 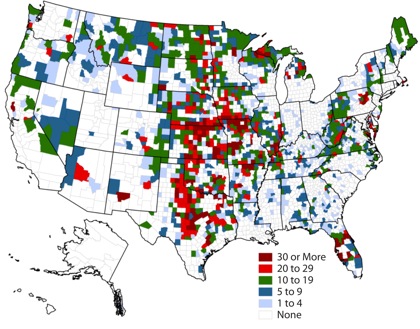 One of the reasons I love Brown Valley so much is that you know the people you’re dealing with: they’re a neighbor or a friend or a friend-of-a-friend. And you can trust them because they are part of the community. If there’s a bad egg around you, you find out pretty fast.

As if they were following this research, Hollywood has begun to tell the story differently. In the recent film Cedar Rapids, the naive and God-fearing insurance  agent  Time Lippe comes to this Iowa city for an industry convention: his first trip out of Brown Valley, his first plane ride, his first hotel room. The opening lines of Cedar Rapids above announce the film’s intentions–to reveal an audience’s notions that rural Americans are insular, close-minded, gullible, and yet somehow the ideal paragons of national virtue:
I considered Trekfest and Cedar Rapids before heading to the Assembly. As I left for St. Paul, Michele Bachmann stood before a national television audience in front of a historic building in Waterloo, Iowa, to announce her candidacy for President. I found myself less interested in her political platform than in the ways she tried to angle her candidacy toward the Iowa primary voters and toward a notion of “Iowa-ness” that equates with Traditional American Values. The keywords she repeated multiple times: Iowa, roots, heartland, values.
As my hosts explained, Waterloo is a conundrum for Iowans–it’s perched between small town and city mentalities and has a diverse population. Though I could not locate the clip, a local TV journalist put together a kind of “gotcha” piece that asked many African-American residents of Waterloo if they were aware of Bachmann’s local connections–it’s a video that showed how far easy campaign rhetoric falls from the realities of rural and heartland roots. Undoubtedly, as the primaries approach, Bachmann will find some company.
Yet, in thinking ahead a few election cycles, we may be embarrassed at how this political rhetoric ignored the demographic changes already occurring in many rural communities. As Kenneth Johnson reminded those gathered for the Rural Assembly in St. Paul, 46% of the children born in America this year will be from a “minority” group–a statistic that cuts to the misnomer of the term itself. 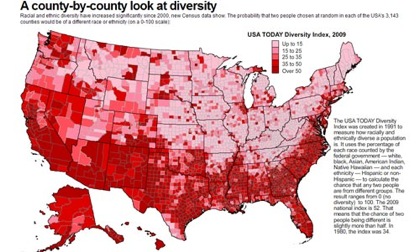 More information on this diversity map can be found at The Maynard Institute
Afterwards a panel comprised of Delia Perez of the Llano Grande Center, Kim Phinney of YouthBuild USA and Peter Morris of the National Congress of American Indians brought the youth dynamic to this research. As this panel eloquently put it, we’re living 2050 today. The statement served as a moment of clarification; we need to respect and share the story of our rural roots, but we also need to think inclusively about who has–and will have–a place in the narrative.
Tweet