Rural Studio And The 20K House 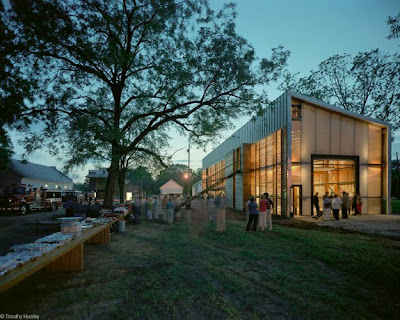 The Newbern Volunteer Fire Department was the first new public building in Newbern for 110 years. It houses fire trucks and satisfies the town’s needs for a place to house elections, council meetings, volunteer firefighter classes, fund-raising and community gatherings. The building is supported by a wood and metal truss structure enclosed by translucent polycarbonate panels protected from the sun by cedar louvers.

In January I discussed Consuela Lee and the Snow Hill Institute, mentioning the community’s hope that an Auburn architecture program might be able to rehabilitate some of the buildings in the future. Today I’m returning with more information on Rural Studio, a program begun in 1993 by Auburn architecture professors Dennis K. Ruth and Samuel Mockbee that works to “improve the living conditions in rural Alabama while imparting practical experience to architecture students.” Here’s Fred A. Bernstein writing in the New York Times in 2005 about Mr. Mockbee’s legacy in these rural communities:

Like Frank Lloyd Wright, the master of Taliesin, Samuel Mockbee, the Rural Studio’s founder, was a larger-than-life figure. Born in Mississippi, Mr. Mockbee established the Rural Studio in dirt-poor Hale County, Ala., a place where trailers teetering on cinderblocks and disintegrating barns were two of the most common building types.

Hale County was where James Agee and Walker Evans lived when they gathered the material for their 1939 book “Let Us Now Praise Famous Men.” And until Mr. Mockbee arrived, visitors remarked that little had changed since Agee and Evans captured its heartbreaking poverty in words and pictures.

Under Mr. Mockbee, who died in 2001, students identified the poorest of the poor, and built them modest dwellings. Materials were rudimentary – whatever they could beg or borrow – and so the students made their mark with quirky details: a window inserted on a 30-degree angle, a concrete wall studded with soda bottles to let bits of light through. One house has walls made of car tires; another is made of hay bales; yet another of stacks of carpet tiles.

It’s an open secret that Mr. Mockbee liked to work in Hale County because there was no building code enforcement – allowing the students to experiment with unconventional materials and forms.

A number of the houses are in Mason’s Bend, a hamlet near Sawyerville occupied by four extended families. At the center of the enclave is a community chapel, its towering glass wall made of surplus Chevrolet Caprice windshields. When I was there, one of the windshields had shattered and others were in need of washing. But the power of the building – rising skyward with ambitions that belie its low budget – shone through.

The Rural Studio’s site is so visually rich that it’s really worth a visit, especially to see some of the structures Bernstein describes. After Mr. Mockbee’s passing, Andrew Freear took the reins as thesis advisor, and the focus shifted to larger community structures and an outreach program that could bring other students and community members onboard to help with, what seems to me, to be an absolutely visionary project, the 20K House. They’ve asked this question: “what kind of house can be designed for $10,000 in materials when the other $10,000 goes for labor costs and profit?” Here’s a few answers: 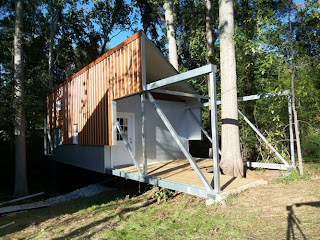 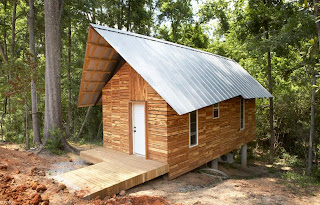 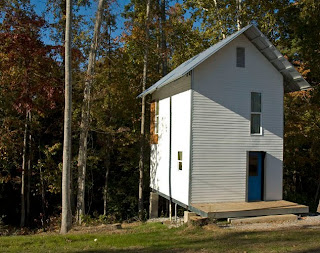 There’s much more information on the projects, their designers and the community on their site. The American Public Media program Speaking of Faith not only produced entire program on Rural Studio, but their site contains articles and resources, and some fantastic videos on everything from the philosophy behind the project to the hands-on process of building a 20K House.

Update:  The film Citizen Architect: Samuel Mockbee and the Spirit of the Rural Studio premiered last week at the South By Southwest festival and is set to air nationally on PBS this summer. Follow the above link for a high resolution trailer for the project.