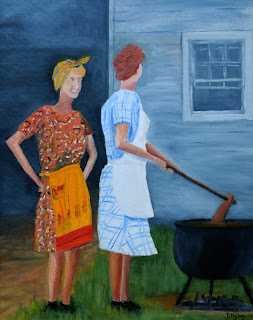 painting by Richard Pillsbury
Folkstreams is currently featuring Carolina Hash, a recent film by Stan Woodward and his Woodward Studio Limited. Mr. Woodward has received much acclaim for his series of films, which use what he calls a “low-profile” method of documenting the people and culture of his native South Carolina. He’s produced, filmed and edited an impressive body of work that has considered local food culture and the arts. To view this 2008 film, follow the link to Carolina Hash.
The documentary does fantastic work in considering the ideas and traditions contained in a pot of South Carolina Hash. It’s a story about food, community and southern culture. For the uninitiated, here’s an entry by Saddler Taylor of the McKissick Museum in Columbia, SC and Mr. Woodward on South Carolina Hash for the Foodways volume of The New Encyclopedia of Southern Culture:

In South Carolina, hash (“barbecue hash” in some places) takes the place of honor held by Brunswick stew in Georgia and Virginia and burgoo in Kentucky. Like both Brunswick stew and burgoo, South Carolina hash is widely regarded as an accompaniment to barbecue. Like other stews, hash has a long history and holds an important place as a food of congregation. By the colonial period, hash was a stew made from small pieces of roasted meat of any kind, cooked down with onions, herbs, and vinegar water.

Served over rice (or sometimes grits), hash varies in terms of specific ingredients from one cook to the next. Broadly speaking, there are three major hash types in South Carolina, corresponding to the state’s primary geographic regions. Hash from the Lowcountry consists of several de-boned hogsheads, supplemented with organ meats like pork liver, cooked in a stock that favors tomato and ketchup. Vegetables can include onions, corn and potatoes. Hash from the midlands consists primarily of higher-quality cuts of pork, onions, and a mustard-based stock. Finally, Upcountry hash is largely beef-based, with no dominant ketchup, vinegar or mustard-based stock. This hash most resembles the camp stews or hunter’s stews of the early 19th century. Its ingredients are normally limited to beef, onions, butter, and a variety of seasonings.

Any mention of stew ingredients yields opportunities to discuss issues of socioeconomic class, since most stew recipes ultimately come from rural folk traditions. The transformation of very common ingredients into exceptional stews is a theme integral to the story of hash making.