Posted by admin on Wednesday, September 8, 2010 · Leave a Comment 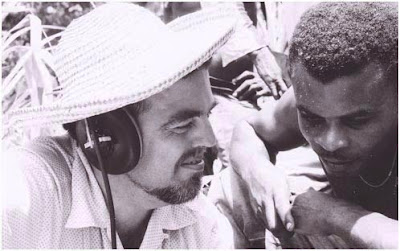 Lomax in the Carribean, 1962; via the Library of Congress
We’re just coming back from a Labor Day holiday and wanted to share this new YouTube channel for The Alan Lomax Archive. We’ve written previously about The Association for Cultural Equity, the organization which continues the work of preserving Mr. Lomax’s archive as well as forwarding, in the digital age, his belief in cultural equity as a basic human right. This YouTube channel is a perfect extension of those goals, representing footage shot during Mr. Lomax’s American Patchwork project. (The edited episodes can be viewed on Folkstreams, just scroll to the bottom of the link.) Here’s what we have too look forward to on the channel: