The Farmville Files: Take Our Jobs 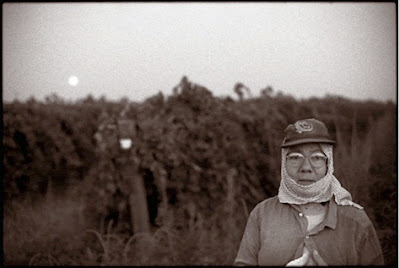 photograph by Rick Nahmias from The Migrant Project
Last evening the NPR program Tell Me More featured a conversation between host Michel Martin and Arturo Rodriguez, the president of the United Farm Workers; his union recently launched a campaign called Take Our Jobs. Coming on the heels of the federal lawsuit over Arizona’s new illegal immigrations law, the campaign offers an easy online application form through which everyday Americans (presumably in borders states) can apply to work alongside the documented and undocumented. Here’s how the UFW frames the presence and necessity of this immigrant farm workforce and their place in our country’s current economic and cultural debates:

There are two issues facing our nation–high unemployment and undocumented people in the workforce–that many Americans believe are related.
Missing from the debate on both issues is an honest recognition that the food we all eat – at home, in restaurants and workplace cafeterias (including those in the Capitol) – comes to us from the labor of undocumented farm workers.
Agriculture in the United States is dependent on an immigrant workforce. Three-quarters of all crop workers working in American agriculture were born outside the United States. According to government statistics, since the late 1990s, at least 50% of the crop workers have not been authorized to work legally in the United States.

To counter their notion that “we are a nation in denial about our food supply,” the UFW is welcoming applications. While this campaign is undoubtedly geared as much toward the media as toward unemployed Americans (Mr. Rodriguez is appearing on the Colbert Show tonight), it raises a whole host of questions that extend far beyond the current flare-ups in Arizona. These are questions just as pertinent in Wheeling, West Virginia as in Phoenix.
Ms. Martin also included journalist Gabriel Thompson in the discussion: he’s the author of the recent Working In The Shadows: A Year Doing The Jobs (Most) Americans Won’t Do, a book that chronicled his experiences working alongside Latino immigrants as a bicycle delivery “boy,” at a rural Alabama chicken slaughterhouse and, among others, a farm worker in the southwest. Here’s a segment of the transcript:

GABRIEL THOMPSON: People would say after five days you start getting use to it and the pain goes away. But really what happens is you just you start redefining what constitutes pain. And so you just have to become use to always having your hands swollen, and used to your back going out, and used to falling asleep at the drop of a hat.

I would say, the positive is that, as opposed to some of the other jobs I did, there is a real feeling in the fields – at least where I was – of solidarity among workers – about workers really feeling that the work they’re doing has a lot of dignity. And they – even if American consumers in grocery stores dont make the connection, workers in the fields make the connection that they are literally feeding the United States American citizens and doing some of the hardest jobs that exist.
MICHEL MARTIN: Mr. Rodriguez, I noticed that you laughed when Gabriel mentioned that living with the constant pain and you actually chuckled. Why did you chuckle?
ARTURO RODRIGUEZ: No, because it’s true. I mean your hands are swollen. They’re cut up. They’re stained. And the women that oftentimes theyll work on their knees and their knees are brown so they won’t wear skirts because they’re ashamed of showing that off to people. I mean those are just the realities that farm workers face every single day. So it’s a grueling effort, a grueling job that takes place and they get very little recognition for what they do. But the reality is, that if it wasnt for them, we would not have food on our tables every single day.

For another interpretation, visit The Migrant Project, a photography exhibit by Rick Nahmias, from which the image above was taken. The University of New Mexico Press has recently published a book of these photographs alongside a selection of essays on this issue. Through this book, and Mr. Nahmias’s sale of prints and his speaking appearances, a great deal of money has been raised to benefit these workers and their families.
Tweet