The Gift of Good Water 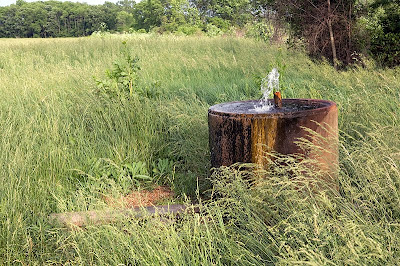 Flowing Well South of Anderson, IN; Kay Westhues
Given the last few posts here on The Art of the Rural, and the oil plumes stretching out like dead branches across the Gulf, this might be a good moment to return to one of our favorite artists. Kay Westhues is an Indiana-based photographer whose work we’ve discussed previously: first, her Fourteen Places to Eat project, and, more recently, Well Stories. If, as a nation, we are beginning to contemplate the spectre of a gigantic “dead zone” of polluted ocean, we might also do well to consider how we can act as proper stewards for our water supplies, how good water relates to the health of ourselves and our communities.
We should place Ms. Westhues work within this discussion. Here’s Julie Ardery, from a recent Daily Yonder piece, describing the contours of this project:

Kay is as much interested in the cultures and traditions that have grown around these springs as in the water wells themselves. She writes that her larger intention is “to explore the notion of ‘ownership’ of water, contrasting a consumer-driven perception of water as a commodity, with a more indigenous understanding of water as a local resource.”

Kay’s photographed pennies tossed for luck in the flowing well near Martinsville and graffiti along a rockwall near the Spout Spring, Martin County. The Tree Spring, on private land in Fountain County, was for awhile restricted to outsiders, but now is accessible to the thirsty and the merely curious alike. In Michigan, Kay says, some bottling companies have tried to monopolize and market ancient springs. But like the geological pressures that force these waters to the surface, there are social pressures too, to keep them flowing — public and free.

We were thrilled to see Erik Eckholm’s piece on Well Stories in The New York Times last week. While it wasn’t Mr. Eckholm’s mission to consider the centrality of Well Stories in a larger, post-BP discussion of our water resources, the connections are very present in his article There’s an urban-rural dynamic to the places Ms. Westhues is discovering–and the narratives she has uncovered extend farther back into American History than we might expect:

Most of the working wells are in rural areas, though Ms. Westhues found one in a vacant lot in Gary, with tire tracks and footprints around it. Some flow into attractive structures of stone or concrete that someone built, others are channeled to a pipe that spills onto rocks.

At the flowing pipe in the town of Pittsburg, in Tippecanoe Township, Marsha Synowiek stopped with her container after driving seven miles to get water for her turtle tank, as well as for her family. “We use it to drink instead of buying bottled spring water,” she said, marveling that even during bad floods, the well water had tested safe.

The artesian spring that feeds the pipe in Pittsburg was used by Indians migrating along the Wabash River. It was also a rest stop in the forced relocation of the Potawatomi Indians in 1838, a wretched march to Kansas now known as the Trail of Death, said Phyllis Moore of the Carroll County Historical Museum.

Some wells are steeped in lore that is, perhaps, too good to try to verify. In the 1920s, the Mudlavia Spring in Kramer was the centerpiece of a resort and hot springs where henchmen of Al Capone and John Dillinger reportedly went to cavort; the charred remains of an old hotel are said to be haunted.