The Legend of Cas Walker 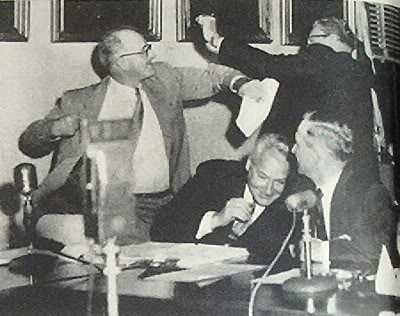 The Cas Walker Knoxville city council fist-fight; LIFE Magazine
[Editor’s Note: As I am facing numerous writing deadlines, this seems like a good time to give a retrospective glance to the first two years of Art of the Rural. Over these weeks I will feature a few new articles, but also many favorites from the archives. Thanks again to everyone who has read and contributed; what began as a labor of love has become a project far larger, and far more rewarding, than I ever could have anticipated – and I deeply appreciate the readership and participation of such a diverse audience. Starting March 12th, we will offer new articles and share some new projects related to our mission.

The Legend of Cas Walker was originally published on April 11, 2011.]

I recently received an email and suggestion from Chuck Shuford, a writer and arts commentator for The Daily Yonder and a number of other publications. I think that many of our readers will be interested in this: the life and times and televised work of Cas Walker (1902-1998). Here’s an excerpt from Mr. Shuford’s correspondence:

My friend sent me a link to Cas Walker pontificating on his early morning TV program — this was probably sometime in the 70’s.   You need to know about Cas.  He owned a chain of grocery stores in E.TN, E. Ky, and SW Va.  He was also a politician, serving on the Knoxville City Council where he got in a fist fight at least once with a councilman holding a contrarian view.  He was elected Mayor of Knoxville and then very soon after, recalled.  He then ran for council again successfully until he retired in the early 70’s. If god ever made an ornerier man, I’ve been hard to come by him.  As someone once said “If I ordered a car load of SOB’s and they only sent Cas, I’d sign for it.”  Dolly Parton and the Everly Brothers sang on his show as youngun’s.   His home, which he lived in until his death, is about 3 blocks from our home.  Ironically, it is now owned by a lefty UT professor who recently wrote a book on Eugene V. Debs.

Writing in the Knoxville Metro Pulse, Betty Bean reveals how this “Hillbilly Collosus” also possessed an ability to manipulate media and technology:

Cas had served on City Council longer than I’d been alive, and had been among the first to grasp the power of television not only for selling stuff but for fighting off fluoridation, metro government, bad check writers, shoplifters, dog thieves, civic improvements of any sort, and police officers who hung around and drank coffee in establishments other than his own.

YouTube offers a small selection of Cas Walker Farm and Home Hour clips, including one of the Dolly Parton performances Mr. Shuford alludes to above. Is that Waylon Jennings playing on the right of the screen?
Cas Walker’s life is impossible to summarize in just a few paragraphs, so please refer to this lively and surprising feature by Ms. Bean in the Metro Pulse. Mr. Walker’s ascension to millionaire grocery magnate is marked by a rough, self-conscious transition from rural to urban life–and a hatred (an accurate word in this case) for “the silk-stocking crowd” who taunted him during his youth. While he had a combative sense of class, and an equally combative political sense, even those who opposed him in these regards were charmed and even awe-struck by the stubborn creativity Mr. Walker channeled into The Farm and Home Hour and his grocery store promotions.
Ms. Bean writes extensively of one of Mr. Walker’s most legendary exploits, when he buried local character Digger O’Dell alive for multiple weeks, just to generate increased sales at this grocery stores:

“He [Digger O’Dell] said ‘I will be buried, six feet underground, with a stovepipe running down to where I am so people can talk to me.’ I [Cas Walker] said, ‘What do you get for that kind of work?'”

“I said ‘I was thinking about offering you $25 a day, but I am going to offer you $50.’ His wife was a Jewish woman and she was shaking her head yes so I knew I was going to start burying a man and I had never had that experience before.

“We dug our hole, and I got ready to bury him. Of course, I advertised that I was going to bury him at a certain time. You never seen a crowd like we had.”

Digger had a telephone, and Walker remembers that he “talked with women all night. You have never experienced a ladies man such as this one was.”

Walker put up a tent over Odell’s grave to accommodate the crowd, which one night numbered 1,500 at 2 a.m.

But Digger wanted to be dug up before he had fulfilled his 30-day contract. Walker was having none of it, since daily receipts at the Chapman Highway store had increased from $3,500 to $8,000.

“I told him that was too much money to dig up,” Walker said in a 1990 interview with the Knoxville Journal.

Digger started faking heart attacks and calling the newspapers and the health department to complain that Walker was denying him medical care.

Walker’s solution was to dress two women who worked for him in “nurse suits” and station them above the grave, selling barbecued chicken sandwiches.

Knoxviews offers a brief write-up of these stunts (including the LIFE Magazine fist-fight)–make sure to read the comments section, as many local folks contributed their own memories of Cas Walker.
The Tennessee Archive of Moving Image and Sound also houses many of the historical Cas Walker commercials and Farm and Home Hour tapes. TAMIS deserves its own post here on the The Art of the Rural, and that will be forthcoming, but, until then here is one of the archival commercials: