The March On Blair Mountain 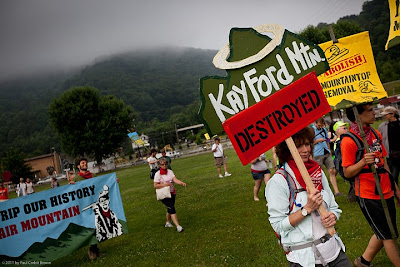 Photograph by Paul Corbit Brown
As many of our readers know, this week marks a historic evolution in the Appalachia Rising movement against Mountaintop Removal, as many citizens have begun The March on Blair Mountain. While we’ve been sharing information and links on our Facebook page, I wanted to make sure that folks who don’t check that site can learn more about this march.
While many of us may not be able to join in the march as it reaches Blair Mountain on Saturday, June 11th, we can help from afar in many ways. The most imperative: these individuals need any donations we can spare to help with a logistical snare that could threaten to stop their progress towards Blair. Whether this is politically-motivated or just case of obscure county ordinances (or both), the march has met with a complication:

last night after setting up our campsite, Boone County Officials showed up and told us that we no longer had permission to camp in the park, and that if we didn’t leave we’d all be arrested.

We’re determined to carry on the march. We didn’t come here to stand up to the police in a county park, we are marching on Blair Mountain to stand up to the coal industry, preserve the mountain and its history, and end MTR coal mining.

We’re arranging alternative camping arrangements, and ensuring that we have walkie-talkies and safety equipment to keep everyone safe and secure. Bottom line, we need to raise $5000 to keep the March moving safely and securely.

As the organizers suggest, if their supporters can all spare $5 to this cause, then this problem can be quickly side-stepped.
There is much more information on this march and Blair Mountain’s place in Appalachia’s history at The March On Blair Mountain site. While this is grass-roots activism, it is also a project that has integrated music, writing, and oral history into its narrative–promising that this conversation will not fall silent the morning after the march concludes.
Below we’ll feature a short film on the importance of Blair Mountain, and a recap from the first day of the march, followed by the opening to the official press release. Folks can follow the progress at the above links, and also on Twitter at http://twitter.com/#!/marchonblairmt [@marchonblairmt] and http://twitter.com/#!/app_rising [@App_Rising].
While here at The Art of the Rural we work to recognize that our readers share a diverse range of political and philosophical views (and thus refrain from much editorializing), we feel that this issue is an exception. I know that I speak for my fellow editors and contributors when I say that Mountaintop Removal is an environmental and human rights issue, a spiritually-damaging practice that threatens the very culture of Appalachia. There simply is no coherent political or philosophical argument in defense of the strip mining of these mountains.
The Battle of Blair Mountain from jordan freeman on Vimeo.

Upwards of 500 marchers from across Appalachia and the United States will participate in a 50-mile march from Marmet, W.Va., to Blair, W.Va., calling for the preservation of Blair Mountain and the abolition of mountaintop removal mining, in an event dubbed Appalachia Rising: The March on Blair Mountain. Blair Mountain, located in Logan County, W.Va., is currently under threat of destruction by mountaintop removal.
Marchers will follow the same route as the coal miners who marched to Blair Mountain in 1921 in an effort to unionize mines in southern West Virginia. The ensuing battle between 10,000 coal miners and the coal industry’s hired gunmen is remembered as the largest armed uprising in United States history since the Civil War, and a landmark event in the labor struggles of the early 20th century.

“Ninety years ago, Blair Mountain epitomized the struggle of working men everywhere who sought a better quality of life,” said Chuck Keeney, a history professor at Southern West Virginia Community and Technical College and the great-grandson of famed UMWA leader Frank Keeney. “Today, Blair Mountain’s meaning is very similar, for we march to honor the past and provide a vision for a better quality of life for both mountaineers and all Americans.”

Day 1 of the March on Blair Mountain from jordan freeman on Vimeo.

Related Articles:
Wendell Berry Joins Sit-In In Kentucky Governor’s Office
Mountaintop Removal: Humor and Sincerity
Coal, The Media, And The University
Filming The Coal War
Appalshop And The Mine War On Blackberry Creek