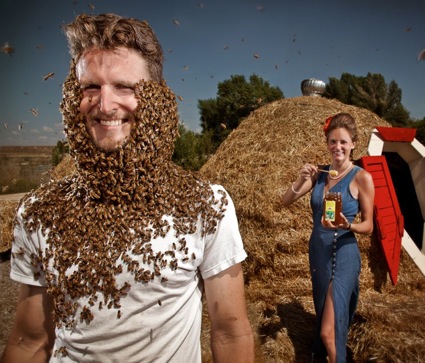 Selection from Farmers of the Front Range 2012
[Editor’s Note: Folks, one of the new editions I am proposing for AOTR in 2012 will be a weekly Friday feature that expands on the rural arts and culture links we offer in our Facebook feed. My thought is that it’s useful to use Facebook as a resource to get the word out quickly, and then return in more depth to these pieces on the AOTR page itself. Aside from also sharing our AOTR articles, I am planning to use the Facebook feed in 2012 as easy and accessible location for rural art and culture news and resources. Thanks again for reading AOTR – and have a great weekend.]
• We learned from Roots of Change about the Farmers for the Front Range 2012 calendar, which features local farmers as pinups. Here’s Susan Clotfelter writing in the Denver Post:

Fort Collins collaborators Liz Gaylor and Kelsi Nagy had been chatting up the concept for about a year and got serious about it last summer. With a few weeks of time, $15,000 in credit-card money and the help of photographer Darren Mahuron, they created the first “Farmers of the Front Range 2012 Calendar” — all in a few weeks.

“We love the farming community and Colorado, and we want to get more people connected to it,” said Nagy. Bad news about industrial food, such as the “Food, Inc​.” documentary, makes people feel powerless, she added. “So supporting these local, living economies are one way we can take back control.”

Each month features a photograph of people you may have met who produce vegetables, fruit, meat, cheese, or honey, along with an epigram, a recipe, and a description of the farm and farmers. Gaylor and Nagy plan to return all or most of the profits for the 2012 version to the featured farms.

• The Revivalist: Word From The Appalachian South carried word this week of the premiere of Moonshiners, a reality television show following the lives of moonshiners – and featuring the legendary Popcorn Sutton:
• Last week we discussed Excavated Shellac and its critically-acclaimed recent release Opika Pende: Africa at 78rpm. This week Randall Roberts of The Los Angeles Times Pop & Hiss music blog offered this look into the life and work of Jonathan Ward:

Jonathan Ward’s music room in his second-floor Angeleno Heights walk-up is a tight, comfortable space with three walls full of records and itsy speakers hung high on the walls in acoustically precise intervals. The 39-year-old writer, archivist, collector and perhaps most important, listener, has just received his copy of a project that has consumed him for the last 14 months. “Opika Pende: Africa at 78 RPM,” is a four-disc, 100-song collection and companion book of never before compiled regional African music from the early 1900s through the ’60s. Much of it is culled from fragile original shellac recordings that have miraculously survived a journey across space and time to land on Ward’s shelves.

He pulls out a recent acquisition: a Mauritanian record that he places on the turntable. The speakers fill the room with hiss and crackle, and a female voice moans while a high-lonesome stringed instrument meanders along. It’s profoundly moving and resurrects long-buried voices within its crackling grooves.

• Jim Gerritsen, president of the Organic Seed Growers and Trade Association, spoke last Sunday at a farmers’ march in Zuccoti Park about the need for local, organic, and family-scale agriculture. (Portions of Mr. Gerritsen’s remarks can be seen here.) Kerry Trueman offers an in-depth write-up on the event in Grist:

Today, the bronze bull — that icon of the OWS movement — is the lone farm animal you’ll find in the financial district. And the barricades are back, but only to keep Zuccotti Park’s mic checkers in check. That surprisingly fertile concrete plaza has yielded a bumper crop of grassroots activists, to the discomfort of (most of) the 1% and the shills who bill them. But the voices of farmers — a.k.a. the 1% that grows the food that 100% of us eat — have been largely missing from this movement to reclaim our democracy, despite the fact that food has become a commodity that enriches a few at the expense of the many.

That all changed this past Sunday, though, when a group of farmers from around the country marched to Zuccotti Park accompanied by their allies: food justice activists, community gardeners, and other advocates for a more equitable, ecologically sound, re-localized food system.

• Thanks to Maegon Mayes for leading us to this entry from by Claire O’Neill on NPR’s blog The Picture Show that considers the contemporary and historical context for prison mug shots. The present: The Slammer, one of many new publications that exclusively features the mugshots of arrested individuals; the past: Pictures From a Drawer: Prison and the Art of Portraiture (Temple University Press), written and edited by Bruce Jackson, the James Agee professor of American Culture at the University of Buffalo. Here’s the historical comparison: 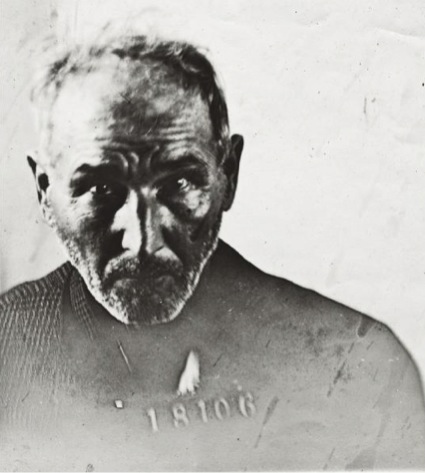 • The Appalachian Media Institute has been dedicated to teaching media skills to local youth for decades; in the age of new media and digital storytelling, AMI stands as an organization training a new generation of media artists – and also telling stories that can reach from the hills of Appalachia to a global audience. Folks can read about their mission here, and view below their Movie of the Month: Fire in a Jar, a film by Casey Castle, Dwayne Goble, and Misty Humphrey. They examine the art and culture of moonshining in Appalachia (and banjo legend Lee Sexton also makes an appearance):
• On the subject of digital storytelling, our friends at Epicenter led us to discover Cowbird, an absolutely gorgeous new site that features audio and visual diaries and “sagas:” individual stories that revolve around a common event or theme. The first saga they’ve gathered tells the story of Occupy Wall Street. Cowbird has just launched; here’s how they explain their mission:

Cowbird is a simple tool for telling stories, and a public library of human experience. We are a small community of storytellers, interested in telling deeper, longer-lasting, more nourishing stories than you’re likely to find anywhere else on the Web.
Cowbird allows you to keep a beautiful audio-visual diary of your life, and to collaborate in documenting the overarching “sagas” that shape our world today. Sagas are things like the Japanese earthquake, the war in Iraq, and the Occupy Wall Street movement — things that touch millions of lives and define the human story.
Our short-term goal is to pioneer a new form of participatory journalism, grounded in the simple human stories behind major news events and universal themes. Our long-term goal is to build a public library of human experience, so the knowledge and wisdom we accumulate as individuals may live on as part of the commons, available for this and future generations to look to for guidance.

• Through mnartists.org we learned of the upcoming exhibit Rural America Contemporary Artists at The Arts Center of St. Peter in Minnesota. Ed Lee offers an article on the show, and it’s national network of rural artists in the St. Peter Herald; this work is curated by Brian Frink, an artist and professor at The University of Minnesota-Mankato.
Please stay tuned for more information on this exciting show. Until then, folks can view the Rural America Contemporary Art open group on Facbook here for additional information; included below is Silver by Gregory Euclide, one of the artists on display. Fans of indie-rock will notice that his distinctive style is also behind the gorgeously-layered album cover on the most recent effort by Bon Iver: 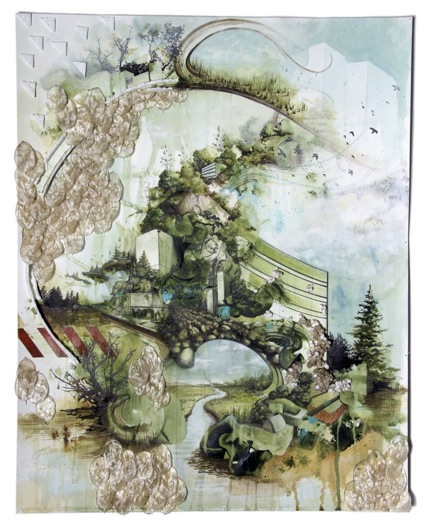