Two Documentaries We Should Consider While Oil Flows In The Gulf 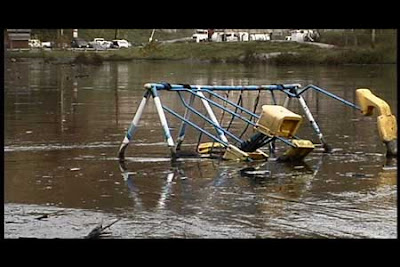 a film still from Sludge
As a follow-up to yesterday’s post on the agrarian and appalachian responses to the Gulf oil disaster, here are two documentary films which expand the discussion further to reveal how what’s occurring off-shore right now is actually endemic to the rural communities across this country. Tucked away from urban media coverage, these towns have endured the same corruption, lack of oversight and outright acts of reckless arrogance that have found a confluence in the Deepwater Horizon.
Sludge is a 2005 documentary produced by Appalshop and directed by Robert Salyer. It’s the culmination of a four year project that follows the after-effects of the Martin County, Kentucky slurry pond spill. It’s a phenomenal film that balances investigative journalism with local storytelling to reveal both the troubled science and the politics behind this wide-reaching environmental disaster:

Shortly after midnight on October 11, 2000, a coal sludge impoundment in Martin County, Kentucky, broke through an underground mine below, propelling 306 million gallons of sludge down two tributaries of the Tug Fork River. By morning, Wolf Creek was oozing with the black waste; on Coldwater Fork, a ten-foot wide stream became a 100-yard expanse of thick sludge. The spill polluted hundreds of miles of waterways, contaminated the water supply for over 27,000 residents, and killed all aquatic life in Coldwater Fork and Wolf Creek. The spill was 30 times larger than the Exxon Valdez and one of the worst environmental disasters ever in the southeastern United States, according to the EPA.

Gasland is a current documentary that has been receiving an increasing amount of media attention after it landed Sundance Film Festival’s Jury Prize for Documentaries earlier in the year. The film is directed by Josh Fox; after a gas company offered him $100,000 for the rights to drill for natural gas on his land in upstate New York, he decided to learn more about the process of “fracking” these operations use in order to release the natural gas from the underground layers of shale. Gasland is the documentation of his process of discovery, a journey that takes him to all corners of the country; what he finds is frightening, especially given that, due to changes made by the Bush Administration, these drilling operations were not required by law to report to the EPA. Mr. Fox is currently touring with the film to communities in New York and Pennsylvania (where large gas deposits are currently being pursued) to spread the word on his findings:
Here also is an informative interview with Mr. Fox from the NOW program on PBS:
Tweet