Update: The Black Hills Are Not For Sale 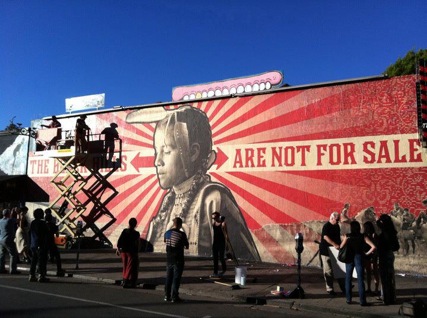 Mural Installation on Melrose Avenue in Los Angeles; Honor The Treaties Facebook Page
Last year we discussed Honor The Treaties, a promising collaboration between photographer Aaron Huey, the Pine Ridge Reservation in South Dakota, and a host of urban and indigenous street artists.
Today we have more information on the latest developments in this project which crosses all kinds of generational, regional, and rural-urban lines. Here’s video the recent Shepard Fairey installation on Melrose Avenue in Los Angeles, followed by Mr. Huey’s brief summary of the project:

The Black Hills Are Not For Sale from sinuhe xavier on Vimeo.

“The Black Hills are not for sale!”  is a common rallying cry for Treaty rights on the Pine Ridge Indian Reservation.

In 1980 The longest running court case in U.S. history, the Sioux Nation v. the United States, was ruled upon by the U.S. Supreme Court.The court determined that, when the Sioux were resettled onto reservations and seven million acres of their land were opened up to prospectors and homesteaders, the terms of the second Fort Laramie treaty had been violated. The court stated that the Black Hills were illegally taken and that the initial offering price plus interest should be paid to the Sioux Nation. As payment for the Black Hills, the court awarded only 106 million dollars to the Sioux Nation. The Sioux refused the money with the rallying cry, “The Black Hills are not for sale.”

The United States continues on a daily basis to violate the terms of the 1851 and 1868 Fort Laramie treaties with the Lakota. The call to action I offer today is this: Honor the treaties.  Give back the Black Hills.  It’s not our business what they do with them.

My goal is to amplify the voices of my many Lakota friends and family on Pine Ridge, all of whom have advised me on this campaign. 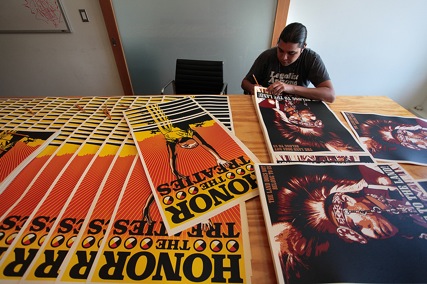 Ernesto Yerena signing copies of his contributions to the project
More information, as well as downloadable images for wheat pasting, can be found at Honor The Treaties. The organization also hosts a Facebook page (where many more images and videos can be found), as well as a tumblr page.
Related Articles:
Honoring The Treaty: Aaron Huey And The Pine Ridge Reservation
The People Speak: New Work From Jetsonorama
Tweet