We Juke Up In Here: Mississippi Juke Joint Traditions 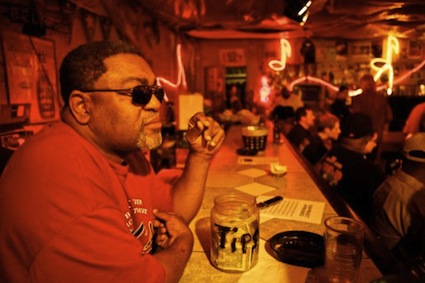 Red Paden at home in Red’s Lounge; Lou Bopp
This month will see the release of a new documentary from Jeff Konkel of Broke and Hungry Records and Roger Stolle of the Cat Head music and art store. We Juke Up In Here, co-directed with Damien Blaylock of Atavistik Pictures, explores the living tradition of Mississippi juke joints:

We Juke Up In Here follows producers Jeff Konkel and Roger Stolle as they explore what remains of Mississippi’s once-thriving juke joint culture. The film is told largely from the vantage point of Red Paden, proprietor of the legendary Red’s Lounge in historic Clarksdale, Mississippi. Paden, a true Delta character and jack-of-all-trades, has been running his blues and beer joint for more than 30 years – providing one of the region’s most reliable live blues venues and an authentic stage for a cavalcade of veteran blues performers, both legendary and obscure.

Told through live music performances, character-driven interviews and rare on-camera blues experiences, viewers are taken below the surface of the quasi-legal world of real Delta jukes – while it’s still living and breathing. Mississippi’s juke joint culture may be at a crossroads, but as Red likes to say, “The Game’s for life . . . and that’s for damn sure!”

Konkel and Stolle previously collaborated on 2009’s award-winning documentary M for Mississippi: A Road Trip through the Birthplace of the Blues. The producers have made a life’s work of recording and promoting the living blues in Mississippi — through the artists on Konkel’s Broke and Hungry label and through Stolle’s legendary Cat Head music and art store and his book The Hidden History of Mississippi Blues.
The trailer for M for Mississippi, also co-directed with Damien Blaylock, is included below:
Tweet