Well Stories and the Photography of Kay Westhues 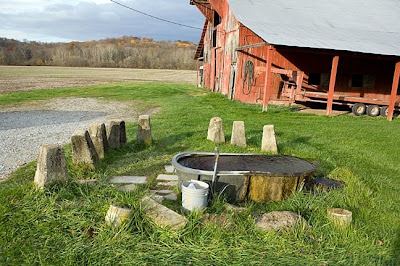 Last weekend we mentioned Fourteen Places To Eat, a photo-blog by Indiana photographer Kay Westhues. She has started a new project that addresses a rural phenomenon that has since been unexplored, but promises to reveal a great deal about our relationships to community and place. Here’s how Ms. Westhues describes her Well Stories project:

This idea was developed as I photographed rural communities during my previous photo project, oddly enough titled Fourteen Places to Eat.  I would occasionally hear remarkable stories about local wells from the people who lived near them. People would enthusiastically describe the good-tasting water they could get from a flowing pipe in the center of town or on an obscure county road. I would drive to the wells and see people (at times in queues) pull up in cars, fill containers with water, and drive off.

This was amazing to me. The fact that people would drink water that comes from a pipe in the ground — and that they would prefer to make a trip to gather water, rather than get it from their taps — was a truly novel concept. I wanted to find out more about people who got their water from public wells and springs.

The wells, called artesian wells, get their water from a confined aquifer containing groundwater that is pressurized and flows upwards, without need for a pump. These wells are filtered naturally and have been flowing for decades. Prior to public water systems, wells and springs were often used to fill cisterns when lack of rain caused them to run dry. These places were a critical source of life and often mark very early human settlements.

It is not the wells themselves that interest me as much as the local culture that has grown around them. I hope to photograph the people who get water from these wells, and collect stories about their relationships with the wells and water. I intend to explore the notion of ‘ownership’ of water, by contrasting a consumer-driven perception of water as a commodity, with a more indigenous understanding of water as a local resource.

Well Stories contains a fantastic range of photographs that, as her introduction suggests, captures both the social connections and the natural beauty of these sites. In addition, some fantastic short videos  accompany the photographs from each well, and some are unexpectedly meditative, while others feature local folks exploring how the well has featured in their family history. Don’t forget to also view the interactive map.

Ms. Westhues also has a personal website with a generous portfolio of work. It’s a gorgeous and moving selection of photographs that balance the history of these rural communities with the palpable evidence of economic and social change. Like Fourteen Places To Eat, these photographs “celebrate rural life without idealizing it,” and they don’t veer away from telling the hard truths about the challenges facing rural America. It’s a phenomenal portfolio–well worth visiting and revisiting.