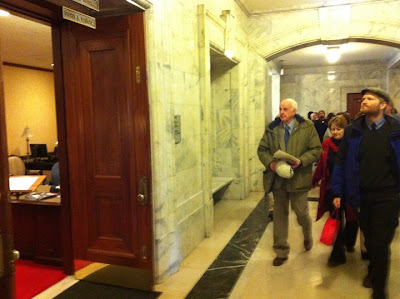 photograph via the Kentuckians For The Commonwealth
At this hour Wendell Berry has joined a group of about 20 Kentuckians, who are engaging in a non-violent sit-in, requesting a meeting with Kentucky governor Steve Beshear. Kentuckians for the Commonwealth  is offering this site with a live video stream, and also with near minute-by-minute updates via Twitter. Mr. Berry is refusing to leave until their group has been granted a conversation with the governor.
The group’s press release is below. The Louisville Courier-Journal has coverage here; Jeff Biggers has an article here about the sit-in and the “Kentucky Rising.” Also refer to the always-wonderful Mr. Wendell Berry of Kentucky for more information.

FRANKFORT – A group of twenty Kentuckians has gathered at the state Capitol in an attempt to meet with Gov. Steve Beshear to discuss the issue of mountaintop removal mining. They plan to remain in his office until the governor agrees to stop the poisoning of Kentucky’s land, water, and people by mountaintop removal; or until he chooses to have the citizens physically removed.

Among the group are Wendell Berry, 76, the acclaimed writer who has decried mining abuses for the past fifty years; Beverly May, 52, a nurse practitioner from Floyd County; Erik Reece, 43, who has written extensively about the coal industry; Patty Wallace, 80, a grandmother and long-time activist from Louisa; Mickey McCoy, 55, former educator and mayor of Inez; Teri Blanton, 54, a grassroots activist from Harlan County; Stanley Sturgill, 65, a former underground coal miner of Harlan County; Rick Handshoe, 50, a retired Kentucky State Police radio technician of Floyd County; John Hennen, 59, a history professor at Morehead State University; and Martin Mudd, 28, an environmental activist.

While these Kentuckians realize they are risking arrest by refusing to leave the governor’s office, they say they have repeatedly petitioned Gov. Beshear for help, yet their pleas have been ignored. This action is a last resort to seek protections for their health, land, and water.

In a letter to Gov. Beshear, the citizens expressed their desire to communicate “respectfully and effectively” with the governor about the urgent need to stop the destruction of mountaintop removal mining. Among their requests were the following:

§  Foster a sincere, public discussion about the urgent need for a sustainable economic transition for coal workers and mountain communities

§  Withdraw from the October 2010 lawsuit against the Environmental Protection Agency, in which the Beshear administration partnered with the coal industry to oppose the EPA’s efforts to protect the health and water of coalfield residents

“The office of the governor must be held accountable,” they citizens explained in a joint statement.