Wendell Berry’s Jefferson Lecture: "It All Turns On Affection" 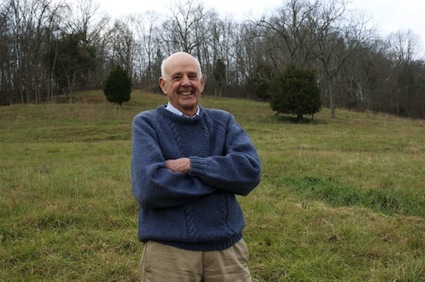 On Monday night Wendell Berry delivered “It All Turns on Affection,” the 2012 Jefferson Lecture at the Kennedy Center. Each year the National Endowment for the Humanities offers this lectureship, “the highest honor the federal government bestows for distinguished intellectual and public achievement in the humanities.”
Mr. Berry’s talk covers an extraordinary amount of ground — from an epigraph from Howards End, to memories of his grandfather’s struggles with the economies set in place by the American Tobacco Company, and to many locales and texts in between. Well-versed readers of Mr. Berry’s prose and poetry will no doubt share my sense that this essay revisits (and re-contextualizes) many of the concerns of his work — closing some circles, but opening up new ones as well.
There is much to quote and discuss within “It All Turns on Affection,” yet, in this brief piece, I’ll include these two paragraphs, moving in how they call on all citizens — rural and urban — to return to first principles to find their relationship to place and practice:

I will say, from my own belief and experience, that imagination thrives on contact, on tangible connection. For humans to have a responsible relationship to the world, they must imagine their places in it. To have a place, to live and belong in a place, to live from a place without destroying it, we must imagine it. By imagination we see it illuminated by its own unique character and by our love for it. By imagination we recognize with sympathy the fellow members, human and nonhuman, with whom we share our place. By that local experience we see the need to grant a sort of preemptive sympathy to all the fellow members, the neighbors, with whom we share the world. As imagination enables sympathy, sympathy enables affection. And it is in affection that we find the possibility of a neighborly, kind, and conserving economy.

Obviously there is some risk in making affection the pivot of an argument about economy. The charge will be made that affection is an emotion, merely “subjective,” and therefore that all affections are more or less equal: people may have affection for their children and their automobiles, their neighbors and their weapons. But the risk, I think, is only that affection is personal. If it is not personal, it is nothing; we don’t, at least, have to worry about governmental or corporate affection. And one of the endeavors of human cultures, from the beginning, has been to qualify and direct the influence of emotion. The word “affection” and the terms of value that cluster around it—love, care, sympathy, mercy, forbearance, respect, reverence—have histories and meanings that raise the issue of worth. We should, as our culture has warned us over and over again, give our affection to things that are true, just, and beautiful. When we give affection to things that are destructive, we are wrong. A large machine in a large, toxic, eroded cornfield is not, properly speaking, an object or a sign of affection.

Folks can find a transcription of the lecture here, along with an interview and further information on past Jefferson Lectures. Below we will offer video of Mr. Berry’s talk, which is preceded by remarks by Jim Leach, the chairman of the NEH, and Bobbie Ann Mason, who reads from Mr. Berry’s poem “Leavings.” If the embedded video does not properly play on your browser, please find the permanent link here:
Also, as a fitting epilogue to the lecture, Mark Bittman has written an extraordinary piece today in The New York Times about his recent visit with Mr. Berry in Port Royal. Mr. Bittman receives a call three hours after leaving the farm from Mr. Berry, with this addendum:

“Mark,” he says. “I’ve been thinking about that question about what city people can do. The main thing is to realize that country people can’t invent a better agriculture by ourselves. Industrial agriculture wasn’t invented by us, and we can’t uninvent it. We’ll need some help with that.”